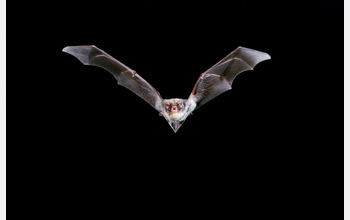 A bat in flight could be ferrying disease to other species.

Most infectious diseases infect multiple host species, but to date, efforts to quantify the frequency and outcome of cross-species transmission (CST) of these diseases have been severely limited.

This lack of information represents a major gap in knowledge of how diseases emerge, and from which species they will emerge.

A paper published this week in the journal Science by a team of researchers led by Daniel Streicker of the University of Georgia has begun to close that gap.

Results of a study, conducted by Streicker and co-authors from the U.S. Centers for Disease Control, the University of Tennessee-Knoxville, and Western Michigan University, provide some of the first estimates for any infectious disease of how often CST happens in complex, multi-host communities--and the likelihood of disease in a new host species.

"Some of the deadliest human diseases, including AIDS and malaria, arose in other species and then jumped to humans," said Sam Scheiner of the National Science Foundation (NSF)'s Division of Environmental Biology, which co-funded the research with NSF's Directorate for Geosciences through the joint NIH-NSF Ecology of Infectious Diseases Program.

"Understanding that process," said Scheiner, "is key to predicting and preventing the next big outbreak."

Rabies is an ideal system to answer these questions, believes Streicker.

The disease occurs across the country, affects many different host species, and is known to mutate frequently. Although cases of rabies in humans are rare in the U.S., bats are the most common source of these infections.

To determine the rate of CST, and what outcomes those transmissions had, Streicker and his colleagues used a large dataset, unprecedented in its scope, containing hundreds of rabies viruses from 23 North American bat species.

They sequenced the nucleoprotein gene of each virus sample and used tools from population genetics to quantify how many CST events were expected to occur from any infected individual.

Their analysis showed that, depending on the species involved, a single infected bat may infect between 0 and 1.9 members of a different species; and that, on average, CST occurs only once for every 72.8 transmissions within the same species.

"What's really important is that molecular sequence data, an increasingly cheap and available resource, can be used to quantify CST," said Streicker.

"This is a breakthrough," said Altizer. "The team defined, for the first time, a framework for quantifying the rates of CST across a network of host species that could be applied to other wildlife pathogens, and they developed novel methods to do it."

The researchers also looked at the factors that could determine the frequency of CST, using extensive data about each bat species, such as foraging behavior, geographic range and genetics.

"There's a popular idea that because of their potential for rapid evolution, the emergence of these types of viruses is limited more by ecological constraints than by genetic similarity between donor and recipient hosts," said Streicker. "We wanted to see if that was the case."

He found, instead, that rabies viruses are much more likely to jump between closely related bat species than between ones that diverged in the distant past.

Overlapping geographic range was also associated with CST, but to a lesser extent.

"CST and viral establishment do not occur at random, but instead are highly constrained by host-associated barriers," Streicker said. "Contrary to popular belief, rapid evolution of the virus isn't enough to overcome the genetic differences between hosts."

Streicker believes that what he and colleagues have learned about bat rabies will be influential in understanding the ecology, evolution and emergence of many wildlife viruses of public health and conservation importance.

"The basic knowledge we've gained will be key to developing new intervention strategies for diseases that can jump from wildlife to humans."

Streicker is continuing his work with rabies and bats with funding for a three-year study from NSF.

He and Altizer, in collaboration with investigators at the CDC, University of Michigan and the Peruvian Ministries of Health and Agriculture, will explore how human activities affect the transmission of the rabies virus in vampire bats in Peru--and how those changes might alter the risk of rabies infection for humans, domesticated animals, and wildlife.