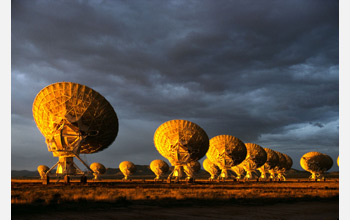 A workshop titled, "Enhancing Access to the Radio Spectrum" (EARS), will be held at the National Science Foundation (NSF) headquarters on Aug. 4, 5 and 6, 2010. Wireless services are estimated to directly or indirectly contribute some $700 billion to $1.4 trillion to the national economy annually. Even small improvements the use of radio spectrum could constitute a big economic impact.

The considerable talents of the academic research community, including engineers, physical scientists, computer scientists, economists and social scientists, could help bring new and innovative solutions to bear on the growing problem, according to Andrew Clegg, NSF program director for EARS. "Ranging from fundamental research that could have substantial long-term impact to applied technologies that could help alleviate growing congestion relatively soon, we hope to collect a lot of information from our gathering of experts and are open to any and all ideas," said Clegg.

America is increasingly reliant on wireless access for a growing number of services and applications, ranging from cell phones and broadband Internet access to medical services and national defense. But the radio spectrum--bands of frequencies required for these applications to operate--is becoming increasingly congested, and growing interference could hamper the vast economic benefits derived from wireless connectivity. In response, NSF is assembling academic researchers and representatives from government and the commercial wireless sectors to discuss potential solutions to prevent wireless gridlock.

"These days, ‘I want my MTV' has been replaced with ‘I want my MTV, and more, streaming wirelessly, in high definition, at all times, wherever I happen to be," according to Clegg. "The problem is, with today's technology and today's regulations, the radio spectrum can't always support our growing appetite for mobile broadband." In rural areas, which are traditionally underserved by high speed Internet access, infrastructure components such as radio towers are often too expensive given the relatively small number of customers for each tower. In cities, where the infrastructure costs are spread across a greater number of potential customers, there aren't enough radio frequencies to serve the very large number of people wanting service. "We're just experiencing the tip of the iceberg," said Clegg, "as demand for more and more data access will only grow in the foreseeable future." Access to the radio spectrum impacts not only wireless consumers, but critical national priorities such as homeland security, defense, public safety, and healthcare, all of which are experiencing dramatically increasing demands for wireless technology.

NSF is already funding research into many novel approaches to help ease congestion. These include so-called cognitive radios that utilize frequencies that are temporarily fallow by jumping around in the spectrum at a moment's notice; distributed radio networks that use a multitude of closely-spaced low power transmitters rather than a single high-power transmitter; and smart antennas that can beam radio signals precisely in the direction in which they are presently needed, producing less interference in other directions. With exponentially increasing demand on the radio spectrum, an increase in research investment is imperative.

America's growing appetite for broadband access, and the accompanying economic benefits, have drawn recent attention from Congress and the Administration. The Stimulus Act required the Federal Communications Commission (FCC) to draw up a National Broadband Plan to describe how the 100 million Americans presently without broadband access can get connected and how another 100 million Americans presently with broadband access could get even faster service. The plan, which was released by the FCC in March, relies heavily on wireless services to meet its objectives, and calls on the NSF to fund research into radio spectrum efficiency and access.

Similarly, the White House has issued a Presidential Memorandum on "Unleashing the Wireless Broadband Revolution" which calls for significantly increasing the amount of radio spectrum available for broadband access. "America's future competitiveness and global technology leadership depend, in part, upon the availability of additional spectrum," according to President Barack Obama. "The world is going wireless, and we must not fall behind." An accompanying fact sheet acknowledges the potential role of EARS in helping to meet the President's objectives.

* Interviews with conference participants may be arranged with Lisa-Joy Zgorski, lisajoy@nsf.gov.