Mixing of two types of magma key to understanding volcano 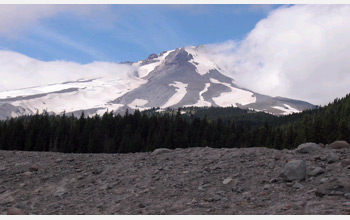 A view of Mount Hood, Oregon, looking north from the White River Valley.

A new study has found that a mixing of two different types of magma is the key to the historic eruptions of Mount Hood, Oregon's tallest mountain, and that eruptions often happen in a relatively short time--weeks or months--after this mixing occurs.

This behavior is different from that of most other Cascade Range volcanoes, including Mount Hood's nearby, more explosive neighbor, Mt. St. Helens.

The research results are reported this week in the journal Nature Geoscience by geologists from Oregon State University (OSU) and the University of California at Davis, in work supported by the National Science Foundation (NSF).

"These results clarify details of the processes that trigger Mount Hood eruptions," said Sonia Esperanca, program director in NSF's Division of Earth Sciences, which funded the research. "Similar triggering processes may occur in several of Earth's most active volcanoes."

"The data will help give us a better road map to what a future eruption on Mount Hood will look like, and what will take place before it occurs," said Adam Kent, a geoscientist at OSU. "It should also help us understand the nature of future eruptions and what risks they will entail."

Geologists are already able to use information like gas emissions, the chemistry of hot springs, ground deformation, local earthquakes and other data to help predict when a volcanic eruption is imminent, Kent said, and the new findings will add to reaching that goal.

Two types of magma, or molten underground rock, are often involved in volcanic processes--mafic magma, which has less silica in it and is more fluid; and felsic magma, which has a higher silica content and a thicker consistency, like toothpaste.

A third type of magma, called andesite, named after the Andes Mountains where it is often found, is composed of a mixture of both felsic and mafic magma.

Andesite is common in volcanoes that form at subduction zones--regions where one tectonic plate is sinking below another--and include those that form around the well-known Pacific Ocean "ring of fire."

The rocks around Mount Hood, scientists say, are almost exclusively formed from andesitic magma. Research suggests that the recharge of mafic magma to mix with its thicker felsic counterpart often occurs just prior to an actual eruption.

"The intense mixing of these two types of magma causes an increase in pressure and other effects, and is usually the trigger for an eruption," Kent said.

"But this process doesn't happen in all volcanic events. In the Cascade Range, Mount Hood appears to be one volcano where andesitic magma and recharge-driven eruptions are dominant."

That may be because of local crustal conditions, Kent said.

Even though the Cascade Range is linked to melting rock from the Cascadia Subduction Zone, some parts of the crust are more difficult than others for magma to move through.

Mount Hood appears to be in a region where it takes the extra pressure of magma mixing to cause an eruption.

Kent said that researchers study these processes not only to improve their ability to predict eruptions and to recognize precursors to eruption, but also to assess possible ore deposits associated with volcanic activity, and learn more about the fundamental dynamics of volcanic processes.

Mount Hood, at 11,249 feet tall, is the highest mountain in Oregon and fourth highest in the Cascade Range.

The last major eruption was in the late 1780s; the effects of the eruption were viewed by members of the Lewis and Clark Expedition in 1805.

Mount Hood is considered potentially active and is the Oregon volcano most likely to erupt, although the chances of that are still small.