Bedrock Is a Milestone in Climate Research 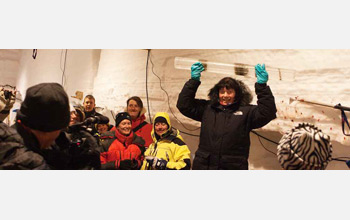 The team at NEEM celebrates the final core sample collected at bedrock level.

After years of concentrated effort, scientists from the North Greenland Eemian Ice Drilling (NEEM) project hit bedrock more than 8,300 feet below the surface of the Greenland ice sheet last week. The project has yielded ice core samples that may offer valuable insights into how the world can change during periods of abrupt warming.

Led by Denmark and the United States, and comprised of scientists from 14 countries, the NEEM team has been working to get at the ice near bedrock level because that ice dates back to the Eemian interglacial period, about 115,000 to 130,000 years ago, when temperatures on Earth were warmer by as much as 5 degrees Fahrenheit than they are today. The Eemian period ice cores should yield a host of information about conditions on Earth during that time of abrupt climate change, giving climate scientists valuable data about future conditions as our own climate changes.

"Scientists from 14 countries have come together in a common effort to provide the science our leaders and policy makers need to plan for our collective future," said Jim White, director of University of Colorado at Boulder's Institute of Arctic and Alpine Research and an internationally known ice core expert. White was the lead U.S. investigator on the project, and his work there was supported primarily by the National Science Foundation's Office of Polar Programs. Other U.S. institutions collaborating on the NEEM effort include Oregon State University, Penn State, the University of California, San Diego, and Dartmouth College.

Greenland is covered by an ice sheet thousands of feet thick that built up over millennia as layers of snow and ice formed. The layers contain information about atmospheric conditions that existed when they were originally formed, including how warm and moist the air was, and the concentrations of various greenhouse gases. While three previous Greenland ice cores drilled in the past 20 years covered the last ice age and the period of warming to the present, the deeper ice layers, representing the warm Eemian and the period of transition to the ice age were compressed and folded, making them difficult to interpret, said White.

After radar measurements taken through the ice sheet from above indicated that the Eemian ice layers below the NEEM site were thicker, more intact and likely contained more accurate and specific information, researchers began setting up an extensive state-of-the-art research facility there. Despite being located in one of the most remote and harsh places on Earth, the NEEM team constructed a large dome, the drilling rig for extracting three-inch-diameter ice cores, drilling trenches, laboratories and living quarters, and officially started drilling in June 2009.

According to Simon Stephenson, Director of the Arctic Sciences Division at NSF, the accomplishment at NEEM "is important because the ability to measure gases and dust trapped in the ice at high resolution is likely to provide new insight into how the global climate changes naturally, and will help us constrain climate models used to predict the future." Stephenson added that the NEEM ice cores will allow scientists to measure conditions in the past with more specificity--down to single years.

"We are delighted that the NEEM project has completed the drilling through the ice-sheet," Stephenson said.  "This has been a very successful international collaboration, and NSF is pleased to have supported the U.S. component."

Accurate climate models based in part on the data collected at NEEM could play an important role in helping human civilization adapt to a changing climate. During the Eemian period, for example, the Greenland ice sheet was much smaller, and global sea levels were about 15 feet higher than they are today, a height that would swamp many major cities around the world.

Now that drilling is complete, scientists will continue to study the core samples and analyze other data they have collected. For his part, White hopes the NEEM project establishes a blueprint for future scientific collaborations.

"I hope that NEEM is a foretaste of the kind of cooperation we need for the future," White said, "because we all share the world."