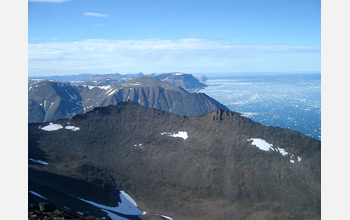 View of the northeastern coast of Baffin Island.

The Earth's mantle is a rocky, solid shell that is between the Earth's crust and the outer core, and makes up about 84 percent of the Earth's volume. The mantle is made up of many distinct portions or reservoirs that have different chemical compositions.

Scientists had previously concluded that the Earth was slightly older than 4.5 billion years old, but had not found a piece of the Earth's primitive mantle.

Until recently, researchers generally thought that the Earth and the other planets of the solar system were chondritic, meaning that the mantle's chemistry was thought to be similar to that of chondrites--some of the oldest, most primitive objects in the solar system. Assuming a chondritic model of the Earth, a piece of the primitive mantle would have certain isotope ratios of the chemical elements of helium, lead and neodymium.

The model that the Earth was chondritic was called into question with a discovery five years ago by a team at the Carnegie Institution of Washington, which suggested the ratio of neodymium on Earth was higher than what would be expected if the Earth were indeed chondritic.

That finding changed the neodymium ratio expected in the primitive mantle and in turn, changed where researchers should be looking to find evidence of a primitive mantle. According to the lead author, Matthew Jackson, "We had been looking under the wrong rock."

When the assumption about the neodymium ratio was altered, Jackson and his colleagues knew they should take a look at lava samples from Baffin Island, since those samples contained the correct ratios of helium and neodymium. They discovered that the lavas also had the correct ratio for lead. The lead isotopes suggest that the samples from Baffin Island date the lava's mantle source reservoir to between 4.55 and 4.45 billion years old, only a little younger than the age of the Earth. The lava sample comes from an ancient rock that melted 62 million years ago.

When the researchers studied the composition of the lava found at Baffin Island, they discovered that the sample had the correct ratios of all three chemical elements--helium, lead, and the new non-chronditic neodymium ratio.  This discovery suggests that the sample from Baffin Island is the first evidence for the oldest mantle reservoir.

This study challenges the idea that the Earth has a chondritic primitive mantle and according to Matthew Jackson is, "suggesting an alternative." One possibility, according to Jackson, is that "the early Earth went through a differentiation event and the Earth's crust was extracted from the early mantle and is now hidden in the deep earth; the hidden crust and the mantle found on Baffin Island would sum to chondritic."

This discovery will help researchers understand the composition of the original, early Earth. This research was supported by the National Science Foundation and the Carnegie Institution of Washington.