Community Earth System Model to be used in next IPCC assessment 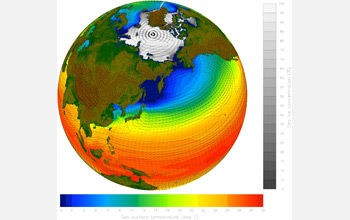 This simulation, produced by the CCSM, provides new knowledge about Earth's climate.

The Community Earth System Model will be one of the primary climate models used for the next assessment by the Intergovernmental Panel on Climate Change (IPCC).

The CESM is the latest in a series of NCAR-based global models developed over the last 30 years. The models are jointly supported by the U.S. Department of Energy (DOE) and the National Science Foundation (NSF), which is NCAR's sponsor.

Scientists and engineers at NCAR, DOE laboratories, and several universities developed the CESM.

"The Community Earth System Model is yet another step toward representing improved physics and biogeochemistry in a coupled model," says Anjuli Bamzai, program director in NSF's Division of Atmospheric and Geospace Sciences, which funds NCAR.

"As our understanding of climate-relevant processes improves, it is imperative to represent these processes in the model."

The new model's advanced capabilities will help scientists shed new light on some of the critical mysteries of global warming, including:

The CESM is one of about a dozen climate models worldwide that can be used to simulate the many components of Earth's climate system, including the oceans, atmosphere, sea ice, and land cover.

The CESM and its predecessors are unique among these models in that they were developed by a broad community of scientists. The model is freely available to researchers worldwide.

"With the Community Earth System Model, we can pursue scientific questions that we could not address previously," says NCAR scientist James Hurrell, chair of the scientific steering committee that developed the model.

"Thanks to its improved physics and expanded biogeochemistry, it gives us a better representation of the real world."

Climate scientists rely on computer models to better understand Earth's climate system because they cannot conduct large-scale experiments on the atmosphere itself.

Climate models, like weather models, rely on a three-dimensional mesh that reaches high into the atmosphere and into the oceans.

At regularly spaced intervals, or grid points, the models use laws of physics to compute atmospheric and environmental variables, simulating the exchanges among gases, particles, and energy across the atmosphere.

Because climate models cover far longer periods than weather models, they cannot include as much detail. Thus, climate projections appear on regional to global scales rather than local scales.

This approach enables researchers to simulate global climate over years, decades, or millennia. To verify a model's accuracy, scientists typically simulate past conditions and then compare the model results to actual observations.

The CESM builds on the Community Climate System Model, which NCAR scientists and collaborators have regularly updated since first developing it more than a decade ago.

In addition, an entirely new representation of atmospheric processes in CESM will allow researchers to pursue a much wider variety of applications, including studies of air quality and biogeochemical feedback mechanisms.

Scientists have begun using both the CESM and the Community Climate System Model for an ambitious set of climate experiments to be featured in the next IPCC assessment reports, scheduled for release during 2013-14.

Most of the simulations in support of that assessment are scheduled to be completed and publicly released beginning in late 2010, so that the broader research community can complete its analyses in time for inclusion in the assessment.

The new IPCC report will include information on regional climate change in coming decades.

Using the CESM, Hurrell and other scientists hope to learn more about ocean-atmosphere patterns such as the North Atlantic Oscillation and the Pacific Decadal Oscillation, which affect sea surface temperatures as well as atmospheric conditions.

Such knowledge, Hurrell says, can eventually lead to forecasts spanning several years of potential weather impacts, such as a particular region facing a high probability of drought, or another region likely facing several years of cold and wet conditions.

"Decision makers in diverse arenas need to know the extent to which the climate events they see are the product of natural variability, and hence can be expected to reverse at some point, or are the result of potentially irreversible, human-influenced climate change. CESM will be a major tool to address such questions."