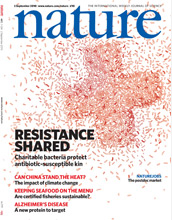 These findings are published in the September 2, 2010 issue of the journal Nature.

Drug resistant bacteria are a problem in many environments, especially healthcare institutions. While the ways in which these cells become resistant are understood at the cellular level, until now, the bacteria's survival strategies at the population level remained unclear.

A new study by James Collins and colleagues at Boston University and the Wyss Institute for Biologically Inspired Engineering at Harvard University reveals that a surprisingly small percentage of bacteria actually become highly resistant "supermutants." In fact, most of the bacteria in their study survived without being resistant to the effective dose of antibiotics in the environment. That is, the individual types of bacteria were not as resistant to the antibiotics as the entire population was.

"We were surprised by this initial result. It forced us to rethink our overall strategy to determine how antibiotic resistance develops and changes in a population over time," said Collins.

Further experiments revealed that, in addition to being drug resistant, the rare supermutants produced high levels of indole, a signaling molecule produced by healthy bacteria. Indole can also promote survival in harsh environments. When bacteria experience antibiotic stress, the dead and dying cells stop producing indole, which likely contributes to further cell death. By overproducing the chemical, supermutants can protect the more vulnerable bacteria by making enough to support a larger population of cells.

However, this indole production is costly for the supermutants, who grow more slowly than mutants that do not produce it. "This altruistic behavior supports a growing body of evidence that suggests single-celled organisms act as communities. We think study of these population-level behaviors will provide important new understanding of evolution dynamics," Collins explained.

These results confirm observations made by health practitioners everywhere: treatment of drug-resistant bacterial infections is more complicated and challenging than anyone thought. According to Collins, "Bacterial communities have an extensive arsenal of techniques to deal with antibiotic assault. By understanding the various strategies they use to survive, we may be able to develop more effective medical treatments."

The Collins lab receives support for these biodynamics studies through the National Science Foundation's Enhancing the Mathematical Sciences Workforce in the 21st Century training program. The research is featured on the cover of the September 2 issue of Nature.