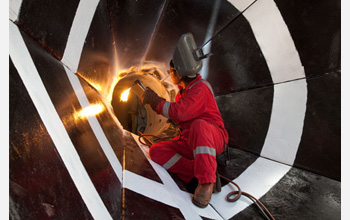 A welder works on a "reentry cone" used to guide drill pipe into the ocean floor.

Marine geologists have returned from two months at sea off British Columbia, Canada, where they installed two observatories in the ocean floor to run innovative experiments at the bottom of the sea.

"The ocean crust is the largest aquifer on the planet," says expedition co-chief scientist Andy Fisher of the University of California at Santa Cruz. "We know it's made up of many sections, but we have no idea how these parts connect or how they interact with one another. The observatories will help us find answers."

These observatories, known as "CORKs" (because they are used to seal boreholes), were installed 200 kilometers (125 miles) west of Vancouver Island, Canada.

Each CORK is packed with scientific instruments that collect samples and data at multiple depths to learn more about the water, pressures, temperatures, chemistry, and microbiology within the rocks and sediments of the ocean crust.

"Expedition 327 has completed some of the most complex borehole observatory installations ever attempted," says Jamie Allan, program director in the National Science Foundation's (NSF) Division of Ocean Sciences, which funds IODP.

"These observatories will measure directly, within the oceanic crust, key characteristics that govern an unseen, remote, yet geographically widespread biological world, and will support long-term chemical and biological sampling and environmental monitoring of this exotic habitat."

The CORKs are being used as part of a sampling and monitoring network to allow scientists to determine the properties of the ocean crust, and to better understand how water, heat, and chemicals are transported across vast distances below the bottom of the ocean.

The volume of salt water in the ocean crust is comparable to the volume of fresh water in Earth's ice caps and glaciers - about 20-30 million cubic kilometers.

Like fresh water on land, the salt water below the seafloor is in motion, moving rapidly from place to place.

Until now, scientists have never been able to "tag" water in one place below the seafloor and determine where it flows.

Experiments begun during the expedition will provide the first direct evidence of active flow pathways and rates in the ocean crust.

Researchers used the boreholes to run experiments during the expedition. In one experiment, they injected benign tracers into the ocean floor to track the directions, rates, and patterns of fluid flow within the seafloor.

In another experiment, microbiologists placed chips of rocks and minerals in the CORKs to identify microorganisms living in the seafloor.

"It's like lowering an empty hotel into the borehole," explained co-chief scientist Takeshi Tsuji of Kyoto University, Japan. "When the chips are recovered in a few years, we will learn who moved in."

Scientists estimate that a large fraction of life on Earth thrives in the "subsurface biosphere."

Once identified, the microorganisms from the CORKs will be matched to pressure and temperature data to determine the physical conditions that are most favorable to life at different depths.

Fisher and his team will recover CORK samples and data and run additional experiments next summer and in later years.

"Through monitoring and experiments with CORKS, we will learn how microorganisms may have developed on Earth, which offers insight into how life may develop on other planets," he says.

"We'll also learn how carbon is transported and might be stored within deep reservoirs."

"The results will be relayed in real time via cables as part of the Neptune Canada Observatory Network, showing the great scientific overlap between ocean observing and scientific ocean drilling."

Three educators, an engineering student, a computer graphics animator, and an artist from the U.S. and France joined Expedition 327 to develop tools to share the expedition's goals with non-academic audiences.

The JOIDES Resolution will be in port at Ogden Point from September 5-9th, 2010. The public is invited to an afternoon of talks on September 7th from 4-6pm at the Inner Harbour Marriott, 728 Humboldt Street, Victoria.

Next IODP Expedition Will Install CORK off Vancouver Island, Canada

The JOIDES Resolution embarks on its next expedition on September 9th. Led by Earl Davis of Canada's Pacific Geoscience Center, the "Cascadia ACORK" expedition will install a new CORK observatory in the Cascadia subduction zone, about 75 kilometers off the coast of Vancouver Island. The CORK will monitor changes in pressure associated with this seismically active setting, and help scientists understand the formation of gas hydrates--ice-like deposits of gas commonly found below the ocean floor.

In a year, the new CORK will be connected to the NEPTUNE-Canada deep-ocean cable network, which will provide power and real-time data collection over the coming decades. An onboard education program, "School of Rock," will teach 20 educators about marine geoscience. Davis and colleagues will return to Victoria on September 19, 2010.

The Integrated Ocean Drilling Program (IODP) is an international research program dedicated to advancing scientific understanding of the Earth through drilling, coring, and monitoring the subseafloor. The JOIDES Resolution is a scientific research vessel managed by the U.S. Implementing Organization of IODP (USIO).