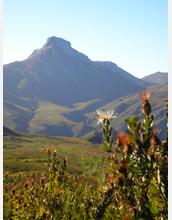 South Africa's Cape Floristic Region is one of the world's plant biodiversity hotspots.

Despite centuries of discovery, most of our planet's biodiversity remains unknown. The scale of that unrecognized biodiversity is a vital question, scientists believe, given its rapid and permanent loss around the globe.

To respond to the need for more knowledge and a better understanding of Earth's biodiversity, the National Science Foundation (NSF) has awarded 14 grants in its Dimensions of Biodiversity campaign.

The campaign is expected to transform how we describe and understand the role and scope of life on Earth.

It promotes novel, integrated approaches to identifying and comprehending the evolutionary and ecological significance of biodiversity in today's changing environment, and in the geologic past.

"Dimensions of Biodiversity is accelerating the pace of biodiversity research and discovery, and enables scientists to think at grand scales," says Joann Roskoski, acting director of NSF's Directorate for Biological Sciences.

With the loss of Earth's biodiversity, biologists have found, we're losing links in the web of life that provide ecosystem services; forfeiting an understanding of the history and future of the living world; and eliminating beneficial discoveries in the domains of food, fiber, fuel, pharmaceuticals, and bio-inspired innovation.

This reality has stimulated the new NSF awards, co-funded by NSF's Directorates for Biological Sciences and Geosciences.

"Dimensions of Biodiversity combines a rapid campaign with a new way of thinking about biodiversity that integrates genetic, taxonomic, and functional questions," says Roskoski.

"Dimensions may accomplish in 10 years what, with a piecemeal approach, would have taken 50 years--a half-century we can no longer wait."

Title: Diversity and forest change: Characterizing functional, phylogenetic and genetic contributions to diversity gradients and dynamics in tree communities
PI (Principal Investigator): Stuart Davies, Harvard University
Summary: This project is the first to be funded by the partnership between NSF and the National Natural Science Foundation of China.  A group of forest scientists from the U.S., China, and other parts of Asia has created an international research coordination network (IRCN) to explore the resilience of forests to global change.

Title: The role of viruses in structuring biodiversity in methanotrophic marine ecosystems
PI: David Valentine, University of California, Santa Barbara
Summary: Microbes in ocean sediments form a unique ecosystem; there methane is consumed, preventing large amounts of this potent greenhouse gas from entering the atmosphere. The research will shed light on a dark corner of the biosphere, and could identify new and novel genes that support life in these environments.

Title: Genomics, functional roles, and diversity of the symbiotic gut microbiotae of honey bees and bumble bees
PI: Nancy Moran, Yale University
Summary: Most of Earth's biodiversity is microbial. This project will examine the microbiota in the guts of bees from two genera--Apis (honey bees) and Bombus (bumblebees). The research will offer important insights into the ecological resilience of organisms that provide economic, ecological, and agricultural value through their pollination services.

Title: Parallel evolutionary radiations in Protea and Pelargonium in the Greater Cape Floristic Region
PI: Carl Schlichting, University of Connecticut
Summary: The fynbos and succulent karoo biomes in South Africa's Greater Cape Floristic Region are two of the world's plant biodiversity hotspots. Using these two plant genera as model systems, this project will look at the ways in which functional diversity of traits evolves and influences community dynamics.

Title: An integrative traits-based approach to predicting variation in vulnerability of tropical and temperate stream biodiversity
PI: N. Leroy Poff, Colorado State University
Summary: Predicting the effects of rapid climate change on biodiversity is an important and urgent scientific challenge. This project will examine the influence of climate change on stream biodiversity in a tropical stream system in the Andes of Ecuador and a temperate alpine stream system in the Colorado Rockies.

Title: Roles of functional, phylogenetic, and genetic diversity in structuring and sustaining plant communities through environmental change
PI: Donald Waller, University of Wisconsin-Madison
Summary: Waller and others will examine the functional traits, phylogenetic relationships, geographic distributions, and patterns of genetic variation in native and introduced plants in Wisconsin forests and grasslands.

Title: An interdisciplinary study of hyperdiverse endophytic fungi and their function in boreal forests
PI: Francois Lutzoni, Duke University
Sumary: This project will look at a diverse and poorly described group of endophytic fungi with symbiotic relationships to boreal vascular plants and lichens.

Title: Can evolutionary history predict how changes in biodiversity impact the productivity of ecosystems
PI: Bradley Cardinale, University of Michigan, Ann Arbor
Summary: Cardinale and colleagues will examine how evolutionary processes among algae generate and maintain diversity at levels from genes to ecosystems in freshwater lakes.

Title: Deconstructing diversity and ecosystem function at multiple spatial and genetic scales in a keystone plant-microbe symbiosis
PI: Thomas Bruns, University of California, Berkeley
Summary: This project will consider soil fungal communities associated with pine-dominated forests in North America, which are poorly known and may serve as a model system for understanding microbial community dynamics.

Title: Significance of nitrification in shaping planktonic biodiversity in the ocean
PI: David Stahl, University of Washington
Summary: Stahl and others will examine the diversity and function of ammonia oxidizing Archaea (AOA) in the ocean and determine the role of these newly discovered organisms in structuring the diversity of phytoplankton.

This program is part of NSF's investment in Science, Engineering, and Education for Sustainability (SEES). The SEES portfolio address challenges in climate and energy research and education using a systems-based approach to understanding, predicting, and reacting to change in the natural, social, and built environments.

Initial SEES efforts focused on coordination of a suite of research and education programs at the intersection of climate and environment, including specific attention to incorporating human dimensions.