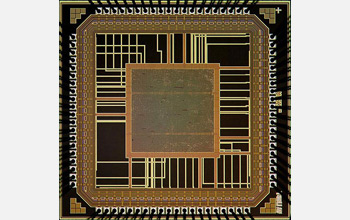 A novel, mixed-signal system-on-a-chip was developed as a platform for implantable prosthetics.

View discussions on the artificial retina, future of the automobile, and development of award winning technologies.

Popular Mechanics has recognized three NSF-funded projects with innovation Breakthrough Awards: an artificial retina returning sight to those who have lost it; a system that uses "controlled rocking" and energy-dissipating fuses to help buildings withstand earthquakes; and an inexpensive medical microscope built for cell-phones that allows doctors in rural villages to identify malaria-infected blood cells.

Those projects, along with 16 others, are featured in the November 2010 issue of Popular Mechanics. The awardees share the issue with the 2010 Leadership Award winner, J. Craig Venter, who is recognized for his breakthroughs in genomics over the last decade.

The artificial retina technology, funded for decades by several NSF biotechnology and transformational research programs, is an experimental system that helps individuals suffering from either macular degeneration or retinitis pigmentosa. Led by University of Southern California engineers Mark Humayun and Wentai Liu, the collaborative team--involving academia, government and industry--has been testing the system with more than 25 individuals, enabling them to progress from total blindness to being able to see shapes and navigate their local surroundings.

The controlled-rocking frame, developed as part of NSF's George E. Brown, Jr. Network for Earthquake Engineering Simulation program, uses replaceable, structural fuses that sacrifice themselves when an earthquake strikes, preserving the buildings they protect. Developed by a team led by Gregory Deierlein of Stanford University and Jerome Hajjar of Northeastern University, the system's self-centering frames and fuses help prevent post-earthquake displacement and are designed for fast and easy repair following a major earthquake, ensuring that an affected building can be reoccupied quickly.

The cellular-phone microscope, also funded by NSF's biotechnology programs, uses no lenses, lowering bulk and cost. The device--developed by NSF CAREER awardee Aydogan Ozcan of the University of California, Los Angeles--focuses LED light onto a slide positioned directly over a cell phone's camera, and after interpretation by software, can differentiate details so clearly that malaria-infected blood cells stand out from healthy ones.

Read more about the winners and their technologies on the Popular Mechanics website.