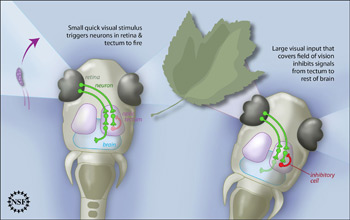 Comparison of neural circuit activated by small quick cue versus large one in zebrafish larvae.

Between alerting us to danger and allowing us to spot prey, vision keeps many animals, including humans, alive. But exactly how does this important sense work, and why is it easier for us to spot movement of small objects in our field of vision, than to notice other things? The complexity of the neural network that supports vision has long baffled scientists.

Now, with a new technology and support from the National Science Foundation, Claire Wyart in Ehud Isacoff's lab at the University of California at Berkeley and Filo Del Bene at Herwig Baier's lab at the University of California at San Francisco have been able to follow entire populations of retinal and brain cells in their test animal: the zebrafish larva, and solve some of the mysteries of its neural circuit that underlies its vision.

The research team's findings were published in the October 29 issue of Science.

Using a newly developed genetically encoded fluorescent reporter of neural activity developed by Loren Looger at the Howard Hughes Medical Institute's Janelia Farm Research Campus, Wyart and Del Bene have been able to follow how large and small visual cues translate into electrical activity in a region of the zebrafish's brain.

The brain region of the zebrafish that receives input from the retina, called the optic tectum, is separated into layers. The top layer receives direct connections from retinal cells, and has a population of both excitatory and inhibitory neurons. These neurons connect to output neurons that project to other brain regions that control how the zebrafish chases prey.

Isacoff, Baier, Wyart and Del Bene have revealed that a large visual stimulus covering the entire field of vision (such as large floating debris, or another zebrafish) results in low output neuron activity. However small (prey-sized) items moving across the zebrafish's field of vision at a prey-like speed activate the output neurons very well. The basis of this "filtering" of information is that large visual stimuli massively activate the inhibitory cell population and inhibit the output cells, while small moving objects activate only a small number the inhibitory tectal cells, enabling the excitation to drive the output cells efficiently.

This mechanism gives the zebrafish good hunting responses to appropriate visual cues, and thereby helps keep it from biting off more than it can chew.

Isacoff and Baier demonstrated that the inhibition of neural activity by large visual stimuli is essential for hunting prey--as evidenced by the fact that prey capture was disrupted when the inhibitory cells were removed or prevented from emitting neurotransmitters.