Inaccurate conclusions may have been reached in many ecosystems 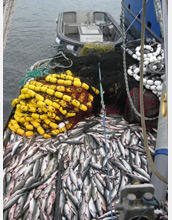 A load of salmon from Prince William Sound, Alaska, awaits delivery to a fish tender.

The most widely adopted measure for assessing the state of the world's oceans and fisheries led to inaccurate conclusions in nearly half the ecosystems where it was applied.

The new analysis was performed by an international team of fisheries scientists, and is reported in this week's issue of the journal Nature.

"Monitoring all the fish in the sea would be an enormous, and impossible, task," said Henry Gholz, program director in the National Science Foundation (NSF)'s Division of Environmental Biology, which co-funded the research with NSF's Division of Ocean Sciences.

"This study makes clear that the most common indicator, average catch trophic level, is a woefully inadequate measure of the status of marine fisheries."

In 1998, the journal Science published a groundbreaking paper that was the first to use trends in the trophic levels of fish that were caught to measure the health of world fisheries.

The 1998 paper relied on four decades of catch data and averaged the trophic levels of what was caught.

The authors determined that those averages were declining over time and warned we were "fishing down the food web" by overharvesting fish at the highest trophic levels and then sequentially going after fish farther down the food web.

Twelve years later newly compiled data has emerged that considers the numbers and types of fish that actually live in these ecosystems, as well as catch data.

The new analysis reveals weaknesses in assessing ecosystem health from changes in the trophic levels of what is being caught.

"This is important because that measure is the most widely adopted indicator by which to determine the overall health of marine ecosystems," said Branch, lead author of the Nature paper.

Those involved with the U.N.'s Convention on Biodiversity, for instance, chose to use the average trophic level of fish caught as the main measure of global marine diversity.

An example of the problem with the measure is in the Gulf of Thailand where the average trophic level of what is being caught is rising, which should indicate improving ecosystem health according to proponents of that measure.

Instead, it turns out fish at all levels have declined tenfold since the 1950s because of overharvesting.

"The measure only declines if fisheries aimed for top predators first, but for the Gulf of Thailand the measure fails because fisheries first target mussels and shrimp near the bottom of the food web, before shifting to fish higher up," Branch said.

Including the Gulf of Thailand, Branch found that changes in the average trophic levels of what was being caught, and what was found when fish populations were surveyed, differed in 13 of the 29 trawl surveys from 14 ecosystems.

Trawl surveys, generally done from research vessels, count the kinds and abundance of fish and are repeated over time to reveal trends.

Branch and co-authors are the first to combine many trawl surveys for analysis--no one had combined more than a handful before.

The trawl survey data came from efforts started three years ago by fisheries scientists and ecologists, who gathered at the NSF-supported National Center for Ecological Analysis and Synthesis (NCEAS) in Santa Barbara, Calif.

What emerged is the most comprehensive set of data yet for fisheries researchers and managers.

It paints a different picture from previous catch data and has revealed another major new finding: on a global scale humans don't appear to be fishing down the food web, Branch said.

"The research shows the importance of synthesis to furthering an understanding of fisheries impacts and management strategies," said Phillip Taylor, section head in NSF's Division of Ocean Sciences.

"For complex ecosystem interactions, answers can only come from repeated scrutiny of data, and comparisons of different scientific methods and systems," said Taylor. "This synthesis points to a path forward to evaluate fisheries influences on ocean ecosystems."

The new catch data reveal that, following declines during the 1970s in the average trophic levels of fish being caught, catches of fish at all trophic levels have generally gone up since the mid-80s.

Included are high-trophic predators such as bigeye tuna, skipjack tuna and blue whiting.

"Globally we're catching more of just about everything," Branch said. "Therefore relying on changes in the average trophic level of fish being caught won't tell us when fishing is sustainable--or if it is leading to collapse."

When harvests of everything increase equally, the average trophic level of what is caught remains steady. The same is true if everything is overfished to collapse. Both scenarios were modeled as part of the analysis.

"The 1998 paper was tremendously influential in gathering together global data on catches and trophic levels, and it warned about fishing impacts on ecosystems," Branch said.

"Our new data from trawl surveys and fisheries assessments now tell us that catches weren't enough. In the future we will need to target limited resources in the best way, focusing on species that are especially vulnerable to fishing and developing indicators that reflect fish abundance, biodiversity and marine ecosystem health.

"Only through such efforts can we reliably assess human impacts on marine ecosystems."

"We conducted the first large-scale test of whether changes in the average trophic levels of what's caught is a good indicator of ecosystem status," said Beth Fulton, co-author of the paper and an ecosystem modeler with the Commonwealth Scientific and Industrial Research Organisation, Australia.

"Catch data might be easiest to get, but that doesn't help if what it tells us is wrong," said Fulton. "Instead we really need to look directly at what the ecosystems are doing."

The research also was supported by the Gordon and Betty Moore Foundation and the UW School of Aquatic and Fishery Sciences.

It used data from a National Center for Ecological Analysis and Synthesis working group; the stock assessment database funded by the Canadian Natural Sciences and Engineering Research Council; the Canadian Foundation for Innovation; and the Sea Around Us project funded by Pew Charitable Trust.