What Can Ice Reveal About Fire? 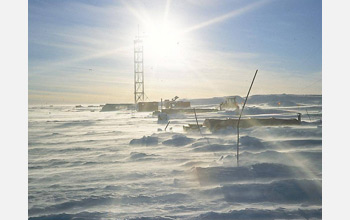 General view of the drill site D47 in Antarctica.

Scientists studying a column of Antarctic ice spanning 650 years have found evidence for fluctuations in biomass burning--the consumption of wood, peat and other materials in wildfires, cooking fires and communal fires--in the Southern Hemisphere.

The record, focused primarily on carbon monoxide (CO), differs substantially from the record in the Northern Hemisphere, suggesting changes may be necessary for several leading climate models.

The research appears online in Science Express on Dec. 2, 2010.

The scientists studied variations in stable (non-radioactive, non-decaying) isotopes of carbon and oxygen, the first such measurements for carbon monoxide collected from ice-core samples.

"Combined with concentration measurements of CO, this record allows us to constrain the relative strength of biomass burning activity over the 650-year period in the Southern Hemisphere," said co-author and research lead John Mak, a geoscientist at SUNY Stony Brook.

The biomass burning trends indicated by the CO largely agree with Southern Hemisphere records tracking charcoal particles in sediments and with measurements of methane from trapped ice.

Unexpectedly, the researchers found that biomass burning appears to have been more prevalent 100 to 150 years ago than it was during the 20th century.

"While this is consistent with previous findings," added Mak, "there is still a common mis-perception that biomass burning rates are much higher today than in the past. This is significant since many researchers assume that human-induced biomass burning is much greater than 'naturally' occurring biomass burning. While this may still be the case--there were people around in the 18th century--the fact that today's rates of [Southern Hemisphere] biomass burning seem to be lower than one to two centuries ago calls for a re-evaluation of sources."