Study of Earth's deep past leads to look into the future 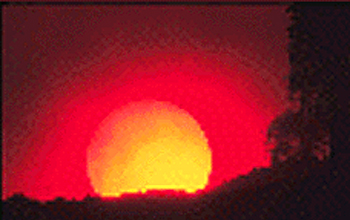 Earth may someday return to a hotter climate when the Antarctic ice sheet didn't exist.

View a video interview with Jeff Kiehl of UCAR.

The magnitude of climate change during Earth's deep past suggests that future temperatures may eventually rise far more than projected if society continues its pace of emitting greenhouse gases, a new analysis concludes.

The study, by National Center for Atmospheric Research (NCAR) scientist Jeffrey Kiehl, will appear as a "Perspectives" article in this week's issue of the journal Science.

The work was funded by the National Science Foundation (NSF), NCAR's sponsor.

Building on recent research, the study examines the relationship between global temperatures and high levels of carbon dioxide in the atmosphere tens of millions of years ago.

It warns that, if carbon dioxide emissions continue at their current rate through the end of this century, atmospheric concentrations of the greenhouse gas will reach levels that existed about 30 million to 100 million years ago.

Kiehl said that global temperatures may take centuries or millennia to fully adjust in response to the higher carbon dioxide levels.

Accorning to the study and based on recent computer model studies of geochemical processes, elevated levels of carbon dioxide may remain in the atmosphere for tens of thousands of years.

The study also indicates that the planet's climate system, over long periods of times, may be at least twice as sensitive to carbon dioxide as currently projected by computer models, which have generally focused on shorter-term warming trends.

This is largely because even sophisticated computer models have not yet been able to incorporate critical processes, such as the loss of ice sheets, that take place over centuries or millennia and amplify the initial warming effects of carbon dioxide.

"If we don't start seriously working toward a reduction of carbon emissions, we are putting our planet on a trajectory that the human species has never experienced," says Kiehl, a climate scientist who specializes in studying global climate in Earth's geologic past.

"We will have committed human civilization to living in a different world for multiple generations."

The Perspectives article pulls together several recent studies that look at various aspects of the climate system, while adding a mathematical approach by Kiehl to estimate average global temperatures in the distant past.

Its analysis of the climate system's response to elevated levels of carbon dioxide is supported by previous studies that Kiehl cites.

"This research shows that squaring the evidence of environmental change in the geologic record with mathematical models of future climate is crucial," says David Verardo, Director of NSF's Paleoclimate Program. "Perhaps Shakespeare's words that 'what's past is prologue' also apply to climate."

Kiehl focused on a fundamental question: when was the last time Earth's atmosphere contained as much carbon dioxide as it may by the end of this century?

If society continues its current pace of increasing the burning of fossil fuels, atmospheric levels of carbon dioxide are expected to reach about 900 to 1,000 parts per million by the end of this century.

Since carbon dioxide is a greenhouse gas that traps heat in Earth's atmosphere, it is critical for regulating Earth's climate.

Without carbon dioxide, the planet would freeze over.

But as atmospheric levels of the gas rise, which has happened at times in the geologic past, global temperatures increase dramatically and additional greenhouse gases, such as water vapor and methane, enter the atmosphere through processes related to evaporation and thawing.

This leads to further heating.

Kiehl drew on recently published research that, by analyzing molecular structures in fossilized organic materials, showed that carbon dioxide levels likely reached 900 to 1,000 parts per million about 35 million years ago.

At that time, temperatures worldwide were substantially warmer than at present, especially in polar regions--even though the Sun's energy output was slightly weaker.

The high levels of carbon dioxide in the ancient atmosphere kept the tropics at about 9-18 F (5-10 C) above present-day temperatures.

Kiehl applied mathematical formulas to calculate that Earth's average annual temperature 30 to 40 million years ago was about 88 F (31 C)--substantially higher than the pre-industrial average temperature of about 59 F (15 C).

The study also found that carbon dioxide may have two times or more an effect on global temperatures than currently projected by computer models of global climate.

The world's leading computer models generally project that a doubling of carbon dioxide in the atmosphere would have a heating impact in the range of 0.5 to 1.0 degrees Celsius watts per square meter. (The unit is a measure of the sensitivity of Earth's climate to changes in greenhouse gases.)

However, the published data show that the comparable impact of carbon dioxide 35 million years ago amounted to about 2 C watts per square meter.

But the record from Earth's geologic past also encompasses longer-term effects, which accounts for the discrepancy in findings.

The eventual melting of ice sheets, for example, leads to additional heating because exposed dark surfaces of land or water absorb more heat than ice sheets.

"This analysis shows that on longer time scales, our planet may be much more sensitive to greenhouse gases than we thought," Kiehl says.

As these improvements come on-line, Kiehl believes that the computer models and the paleoclimate record will be in closer agreement, showing that the impacts of carbon dioxide on climate over time will likely be far more substantial than recent research has indicated.

Because carbon dioxide is being pumped into the atmosphere at a rate that has never been experienced, Kiehl could not estimate how long it would take for the planet to fully heat up.

However, a rapid warm-up would make it especially difficult for societies and ecosystems to adapt, he says.

If emissions continue on their current trajectory, "the human species and global ecosystems will be placed in a climate state never before experienced in human history," the paper states.