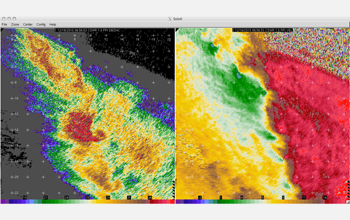 DOW Doppler radar of cells in a snowband; the coiled hooks are the most intense snows.

In this winter of heavy snows--with more on the way this week--nature's bull's-eye might be Oswego, N.Y., and the nearby Tug Hill Plateau.

There the proximity of the Great Lakes whips wind and snow into high gear. Old Man Winter then blows across New York state, burying cities and towns in snowdrifts several feet high. This season, however, something is standing in his way.

The Doppler-on-Wheels (DOW), a data-collecting radar dish, is waiting. This month and next, scientists inside the DOW are tracking snowstorms in and around Oswego to learn what drives lake-effect snowstorms that form parallel to the long axis of a Great Lake and produce enormous snowfall rates.

These long lake-axis-parallel (LLAP) bands of snow are more intense than those of other snow squalls and produce some of the highest snowfall rates and amounts in the world, say atmospheric scientists Scott Steiger of the State University of New York (SUNY)-Oswego, Jeffrey Frame of the University of Illinois at Urbana-Champaign, and Alfred Stamm of SUNY-Oswego.

"The mobility of a DOW," Steiger says, "is ideal for following lake-effect storms. The DOW will allow us to witness them as they form and cross lakes, which other weather radars can't do."

The DOW, or more properly "DOWs" as there are three, is a National Science Foundation (NSF) atmospheric science facility.

A DOW looks more like the dish of a radio telescope than a sophisticated weather instrument. It's mounted on the back of a flat-bed truck. With a DOW on board, the truck becomes an odd configuration of generator, equipment and operator cabin.

Ungainly as it may appear, it's ideally suited to provide detailed information on the inner workings of snow and other storms, says Josh Wurman, director of the Center for Severe Weather Research (CSWR) in Boulder, Colo.

Wurman should know. He and colleagues developed the first DOW in 1995.

The DOW uses Doppler radar to produce velocity data about severe storms at a distance.

When a DOW is deployed, it collects fine-scale data from within a snowstorm and displays features that can't be seen with more distant radars.

The DOW radars are dual polarization, says Wurman, which means that they send out both horizontally- and vertically-oriented energy. By looking at differences in the energy bounced back from these horizontal and vertical beams, scientists can learn more about the snowflakes, ice, rain and snow pellets in snowbands.

The DOWs measure Doppler winds, snow intensity, and properties related to whether snow is dense, comprised of pellets, or formed from loose collections of traditional six-sided snowflakes. A storm's snow crystal type plays a major role in whether lake-effect snowbands drop a few inches of snow--or more than two feet.

The DOWs collect data that will be used to determine how LLAP snowbands intensify and weaken, and move across a region. The scientists are right behind.

"Instead of waiting for snowbands to come to us," says Wurman, "we and the DOWs are going to them."

After forecasting likely snowband events, Steiger, Wurman and colleagues and the DOW drive to one of more than 30 sites near Lake Ontario, Lake Erie, and the Tug Hill Plateau to monitor LLAP snowbands.

During the past week, scientists deployed the DOW to four locations near Oswego and Rochester to study intense snowbands. The bands dropped snow at up to four inches per hour, with final totals of more than two feet.

Initial findings are that intense storm circulations were observed in the bands, and that the snow type changed during the passage of the storm.

More lake effect snows are forecast for this weekend. DOWs and scientists are again heading to New York hilltops to peer inside.

Old Man Winter may have no choice but to give up his secrets.