Putting the Dead to Work 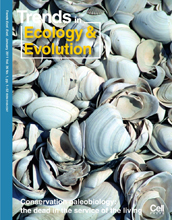 Conservation paleobiologists are looking at ecology and evolution in new ways.

Conservation paleobiologists--scientists who use the fossil record to understand the evolutionary and ecological responses of present-day species to changes in their environment--are putting the dead to work.

A new review of the research in this emerging field provides examples of how the fossil record can help assess environmental impacts, predict which species will be most vulnerable to environmental changes, and provide guidelines for restoration.

The literature review by conservation paleobiologists Gregory Dietl of the Paleontological Research Institution and Cornell University and Karl Flessa of the University of Arizona is published in the January, 2011, issue of the journal Trends in Ecology and Evolution.

The primary sources of data are "geohistorical": the fossils, geochemistry and sediments of the geologic record.

"A conservation paleobiology perspective has the unique advantage of being able to identify phenomena beyond time scales of direct observation," Dietl says.

Such data, says Flessa, "are crucial for documenting the species we have already lost--such as the extinct birds of the Hawaiian islands--and for developing more effective conservation policies in the face of an uncertain future."

"Historically, paleontologists have focused their efforts on understanding the deep-time geological record of ancient life on Earth, but these authors turn that focus 180 degrees," says H. Richard Lane, program director in NSF's Division of Earth Sciences, which funds Dietl's and Flessa's research.

"In putting the dead to work, they identify the significant impact knowledge of fossil life can have on interpreting modern biodiversity and ecological trends."

Ancient DNA, for example, has been used to show that the arctic fox (Alopex lagopus) was not able to move with shifting climates as its range contracted, eventually becoming extinct in Europe at the end of the Pleistocene.

However, the species persisted in regions of northeastern Siberia where the climate was still suitable for arctic foxes.

In another tale from the beyond, fossil evidence suggests that the birds of the Hawaiian Islands suffered large-scale extinctions around the time of the arrival of the Polynesians.

Studies comparing the ecological characteristics of bird species before and after these extinctions reveal a strong bias against larger-bodied and flightless, ground-nesting species.

The pattern suggests that hunting by humans played a role in the extinction of the flightless species.

By the 18th century, the time of the first Europeans' arrival in the islands, most large-bodied birds had already disappeared. European colonization of the islands led to a second wave of exctinctions.

Those birds that survived had traits that helped them weather two onslaughts.

In their review paper, Dietl and Flessa cite a study of the frequency in the fossil record of insect damage to flowering plant leaves in the Bighorn Basin of Wyoming dating from before, during and after the Paleocene-Eocene Thermal Maximum (PETM, some 55.8 million years ago).

The PETM, scientists believe, is one of the best deep-time analogs for current global climate change questions.

Results from the insect research suggest that herbivory intensified during the PETM global warming episode.

"This finding provides insights into how the human-induced rise in atmospheric carbon dioxide is likely to affect insect-plant interactions in the long run," the authors write, "which is difficult to predict from short-term studies that have highly species-specific responses."

The dead can help us even in remote places like the Galapagos Islands.

Scientists have used the fossil pollen and plant record there to show that at least six non-native or "doubtfully native" species were present before the arrival of humans.

This baseline information, says Dietl, "is crucial to a current conservation priority in the Galapagos: the removal of invasive species."

An important role of geohistorical data is to provide access to a wider range of past environmental conditions--alternative worlds of every imaginable circumstance.

Tales of the past that may lead to better conservation practices, crucial for life, not death, on Earth.

The dead, it turns out, do tell tales.