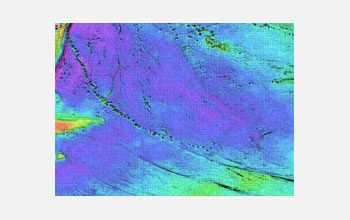 Like a string of underwater pearls, the Louisville Seamount Trail is strung across the Pacific.

Nearly half a mile of rock retrieved from beneath the seafloor is yielding new clues about how underwater volcanoes are created and whether the hotspots that led to their formation have moved over time.

Geoscientists have just completed an expedition to a string of underwater volcanoes, or seamounts, in the Pacific Ocean known as the Louisville Seamount Trail.

There they collected samples of sediments, basalt lava flows and other volcanic eruption materials to piece together the history of this ancient trail of volcanoes.

The expedition was part of the Integrated Ocean Drilling Program (IODP).

"Finding out whether hotspots in Earth's mantle are stationary or not will lead to new knowledge about the basic workings of our planet," says Rodey Batiza, section head for marine geosciences in the National Science Foundation's (NSF) Division of Ocean Sciences.

Tens of thousands of seamounts exist in the Pacific Ocean. Expedition scientists probed a handful of the most important of these underwater volcanoes.

"We sampled ancient lava flows, and a fossilized algal reef," says Anthony Koppers of Oregon State University. "The samples will be used to study the construction and evolution of individual volcanoes."

Koppers led the expedition aboard the scientific research vessel JOIDES Resolution, along with co-chief scientist Toshitsugu Yamazaki from the Geological Survey of Japan at the National Institute of Advanced Industrial Science and Technology.

IODP is supported by NSF and Japan's Ministry of Education, Culture, Sports, Science and Technology.

The samples were retrieved from six sites at five seamounts ranging in age from 50 to 80 million years old.

"The sample recovery during this expedition was truly exceptional. I believe we broke the record for drilling igneous rock with a rotary core barrel," says Yamazaki.

Igneous rock is rock formed through the cooling and solidification of magma or lava, while a rotary core barrel is a type of drilling tool used for penetrating hard rocks.

Trails of volcanoes found in the middle of tectonic plates, such as the Hawaii-Emperor and Louisville Seamount Trails, are believed to form from hotspots--plumes of hot material found deep within the Earth that supply a steady stream of heated rock.

As a tectonic plate drifts over a hotspot, new volcanoes are formed and old ones become extinct.  Over time, a trail of volcanoes is formed. The Louisville Seamount Trail is some 4,300 kilometers (about 2,600 miles) long.

"Submarine volcanic trails like the Louisville Seamount Trail are unique because they record the direction and speed at which tectonic plates move," says Koppers.

Scientists use these volcanoes to study the motion of tectonic plates, comparing the ages of the volcanoes against their location over time to calculate the rate at which a plate moved over a hotspot.

These calculations assume the hotspot stays in the same place.

"The challenge," says Koppers, "is that no one knows if hotspots are truly stationary or if they somehow wander over time. If they wander, then our calculations of plate direction and speed need to be re-evaluated."

"More importantly," he says, "the results of this expedition will give us a more accurate picture of the dynamic nature of the interior of the Earth on a planetary scale."

Recent studies in Hawaii have shown that the Hawaii hotspot may have moved as much as 15 degrees latitude (about 1,600 kilometers or 1,000 miles) over a period of 30 million years.

"We want to know if the Louisville hotspot moved at the same time and in the same direction as the Hawaiian hotspot.  Our models suggest that it's the opposite, but we won't really know until we analyze the samples from this expedition," says Yamazaki.

In addition to the volcanic rock, the scientists also recovered sedimentary rocks that preserve shells and an ancient algal reef, typical of living conditions in a very shallow marine environment.

These ancient materials show that the Louisville seamounts were once an archipelago of volcanic islands.

"We were really surprised to find only a thin layer of sediments on the tops of the seamounts, and only very few indications for the eruption of lava flows above sea level," says Koppers.

More than 60 samples from five seamounts were obtained for microbiology research.

Exploration of microbial communities under the seafloor, known as the "subseafloor biosphere," is a rapidly developing field of research.

Using the Louisville samples, microbiologists will study both living microbial residents and those that were abundant over a large area, but now occupy only a few small areas.

They will examine population differences in microbes in the volcanic rock and overlying sediments, and in different kinds of lava flows.

They will also look for population patterns at various depths in the seafloor and compare them with seamounts of varying ages.

Samples from the Louisville Seamount Trail expedition will be analyzed to determine their age, composition and magnetic properties.

The information will be pieced together like a puzzle to create a story of the eruption history of the Louisville volcanoes.

It will then be compared to that of the Hawaiian volcanoes to determine whether hotspots are on the move.

The IODP is an international research program dedicated to advancing scientific understanding of the Earth through drilling, coring and monitoring the subseafloor.

Additional program support comes from the European Consortium for Ocean Research Drilling, the Australian-New Zealand IODP Consortium, India's Ministry of Earth Sciences, the Ministry of Science and Technology in the People's Republic of China and the Korea Institute of Geoscience and Mineral Resources.

The JOIDES Resolution is a scientific research vessel managed by the U.S. Implementing Organization of IODP (USIO). Texas A&M University, Lamont-Doherty Earth Observatory of Columbia University, and the Consortium for Ocean Leadership comprise the USIO.