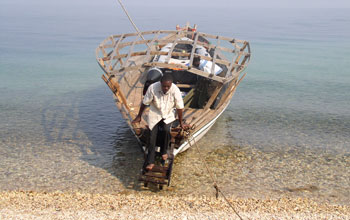 How severe can climate change become in a warming world?

Worse than anything we've seen in written history, according to results of a study appearing this week in the journal Science.

An international team of scientists led by Curt Stager of Paul Smith's College, New York, has compiled four dozen paleoclimate records from sediment cores in Lake Tanganyika and other locations in Africa.

The records show that one of the most widespread and intense droughts of the last 50,000 years or more struck Africa and Southern Asia 17,000 to 16,000 years ago.

Between 18,000 and 15,000 years ago, large amounts of ice and meltwater entered the North Atlantic Ocean, causing regional cooling but also major drought in the tropics, says Paul Filmer, program director in the National Science Foundation's (NSF) Division of Earth Sciences, which funded the research along with NSF's Division of Atmospheric and Geospace Sciences and its Division of Ocean Sciences.

"The height of this time period coincided with one of the most extreme megadroughts of the last 50,000 years in the Afro-Asian monsoon region with potentially serious consequences for the Paleolithic humans that lived there at the time," says Filmer.

The "H1 megadrought," as it's known, was one of the most severe climate trials ever faced by anatomically modern humans.

Africa's Lake Victoria, now the world's largest tropical lake, dried out, as did Lake Tana in Ethiopia, and Lake Van in Turkey.

The Nile, Congo and other major rivers shriveled, and Asian summer monsoons weakened or failed from China to the Mediterranean, meaning the monsoon season carried little or no rainwater.

What caused the megadrought remains a mystery, but its timing suggests a link to Heinrich Event 1 (or "H1"), a massive surge of icebergs and meltwater into the North Atlantic at the close of the last ice age.

Previous studies had implicated southward drift of the tropical rain belt as a localized cause, but the broad geographic coverage in this study paints a more nuanced picture.

"If southward drift were the only cause," says Stager, lead author of the Science paper, "we'd have found evidence of wetting farther south. But the megadrought hit equatorial and southeastern Africa as well, so the rain belt didn't just move--it also weakened."

Climate models have yet to simulate the full scope of the event.

The lack of a complete explanation opens the question of whether an extreme megadrought could strike again as the world warms and de-ices further.

"There's much less ice left to collapse into the North Atlantic now," Stager says, "so I'd be surprised if it could all happen again--at least on such a huge scale."

Given what such a catastrophic megadrought could do to today's most densely populated regions of the globe, Stager hopes he's right.