Tornado Alley features never-before-captured tornado footage as scientists seek to understand the structure and origin of tornadoes, and how they can be forecasted more accurately 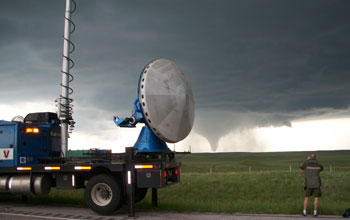 View the trailer of Tornado Alley.

On March 10, at the Museum of Science and Industry in Chicago, Giant Screen Films presented the world premiere of Tornado Alley, a film that documents the effort to understand the origins and evolution of tornadoes.

The film features never-before-seen footage of Sean Casey, star of the Discovery Channel program Storm Chasers and a National Science Foundation (NSF)-funded team of scientists from the recently concluded VORTEX2 tornado research mission. The teams pursue tornadoes in "Tornado Alley," a region in the center of the United States that is home to Earth's most violent and destructive tornadoes.

As Casey's team seeks to capture ground-breaking footage of a tornado from point-blank range, the VORTEX2 team strives to understand the origin and structure of tornadoes. VORTEX2 is the largest and most ambitious tornado research project to date.

The researchers hope to use their findings to improve the ability to predict when and where tornadoes will strike, ensuring greater safety to those in harm's way.

In Tornado Alley, leading researchers Joshua Wurman, Karen Kosiba and Don Burgess represent a team of more than 100 international VORTEX2 participants, who traveled throughout the Plains region of the United States in 2009-2010, using cutting-edge weather measurement instruments to collect scientific data during the life cycle of a tornado.

"Currently, the average lead time, the time between a tornado warning and the tornado occurring, is just 13 minutes, and the false alarm rate is 70 percent," said Wurman. "In order to increase warning times, in order to reduce the false alarm rate, VORTEX2 hopes to learn the differences between which storms will make tornadoes, and which ones will not, and which storms will make the worst, most violent and potentially killer tornadoes."

Kosiba explained that to obtain information about the tornadoes, VORTEX2 used 11 different radars to study various components of the storms. As part of that, the Center for Severe Weather Research operated three NSF-funded Doppler on Wheels (DOW) mobile radars that from the ground collect high-resolution radar data of the inside of the storm.

Tornado Alley also features another radar called DOW7 that takes data in the rear and flank of the storm and provides three-dimensional wind and precipitation maps of the potentially tornado-like regions of storms. DOW7 has a crew of four team members, including Kosiba and Wurman. Each team member focuses on a specific task, for example, driving, navigating, operating the radar and coordinating other radars and teams which deploy weather stations called "tornado pods" in front of the tornadoes.

Some of the special features of the DOW7 include a 56-foot mast that extends its radio range to more than 30 miles at times. DOW7 also has 14 monitors connected to more than 15 different computers so that the team can look at weather forecasts and radar data, track their teams, and communicate with other VORTEX2 teams via the internet.

Yet, working inside of the DOW7, let alone in the midst of a tornado, proves to be no simple feat. "We have to be extremely ambitious, getting instruments to just the right places at the right times," said Wurman. "But at the same time, we have to be extremely cautious, keeping all of the teams and vehicles-some led by over 80 students participating in VORTEX2-safe from not only the tornado, but lightning, flooding, 100 mph thunderstorm winds, softball sized hail, and of course, the tornado."

To safely capture up-close footage of the tornado, Casey and his team travel in the TIV-2, a seven-ton, armored "tornado intercept vehicle" that was engineered and built by Casey. Casey carries a 92-pound IMAX camera that belonged to his father to film the inside of a tornado. The TIV-2 also carries weather instruments, the data from which Wurman and his team use with DOW data to map tornado winds.

In order to find this particular tornado, Wurman explained how VORTEX2 made forecasts for where storms might form that day. "We drove to locations east of the Wyoming Rockies, specifically the Cheyenne Ridge," said Wurman.

"When the forecast storms started propagating off of the Ridge, VORTEX2 drove towards the most prominent storm and began setting up its array of DOW radars [and other instrumentation]. About 22 minutes after we set up the first DOW, a tornado formed and moved into our array, allowing VORTEX2 to collect data during the entire lifecycle, from before birth, as it intensified and through the death of the tornado," he said.

Tornado Alley will open nationally on March 18th in IMAX and other Large Format Theaters. The Tornado Alley Movie website has more details.

In addition to showing in theaters, Tornado Alley will promote an outreach campaign in which Sean Casey and the TIV will visit museums across the country and additional support from NSF will send DOW radar trucks and VORTEX2 scientists on tour to demonstrate the DOW's research tools, tornado pods and to engage audiences with the exciting and innovative aspects of tornado research.