Precedent-Setting Evidence of the Benefits of Biodiversity 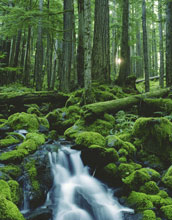 Streams naturally contain different types of algea that remove nitrogen pollution from them.

View a webcast with Bradley Cardinale of the University of Michigan.

Frequent reports of accelerating species losses invariably raise questions about why such losses matter and why we should work to conserve biodiversity.

Biologists have traditionally responded to such questions by citing societal benefits that are often presumed to be offered by biodiversity--benefits like controlling pests and diseases, promoting the productivity of fisheries, and helping to purify air and water, among many others. Nevertheless, until now, many of these presumed benefits had yet to be supported by rigorous scientific data.

But Bradley J. Cardinale of the University of Michigan has produced a new study that finally verifies that biodiversity promotes water quality and explains how it does so. Specifically, the study reveals how biodiversity helps remove excess levels of nutrients from streams that commonly degrade water quality.

Here's how Cardinale's mechanism works: as the number of species of algae in a stream increases, the geographical distribution of these organisms within the stream expands, and the more water these widely distributed organisms may cleanse through a pollution-removing process common to algae.

Cardinale's study, which appears in the April 7 issue of Nature, was funded by the National Science Foundation.

The cleansing power of biodiversity

Cardinale's study helps solve this mystery by explaining how biodiversity promotes the self-cleaning power of streams. According to the study, as algae grow in streams and produce more biomass, they incorporate into their bodies some common forms of pollution and thereby remove it from the water. Each species of pollution-removing algae has evolved and adapted to a different set of conditions, and so occupies a unique mini habitat, or niche, within a water body. Therefore, as the number of species of pollution-removing algae increases in a stream, so too does the number of unique niches that are occupied, filtered and cleansed by them. Hence: the more algae species a stream has, the more total pollutants these organisms may remove from the water.

"As the different habitats in a stream are filled by diverse populations of algae, the stream receives more total biofiltration," said Cardinale. "It's as if the algae work as a better sponge."

"Algae are the sort of thing that are easily overlooked, however Cardinale provides an elegant experiment that shows how the biological diversity of algal species greatly increases the removal of one of the most deadly and insidious toxins in our streams, lakes and rivers," said George W. Gilchrist, a program director in NSF's Division of Environmental Biology.

The process by which species evolve to inhabit their own, unique habitats is known as niche partitioning. "People as far back as Darwin have argued that species should have unique niches, and as a result, we should see a division of labor in the environment," Cardinale said. "But demonstrating that directly has proven very difficult."

Cardinale began his study by growing from one to eight species of algae that are common to North America in each of 150 miniature model streams; each model stream was designed to mimic the varied flow conditions that exist in natural streams, including those dominated by riffles, runs, or calm pools. He then measured the ability of each algal community to soak up a nitrogen compound called nitrate. Cardinale chose nitrates to represent pollution in the study because excess nitrogen is the most common pollutant and the leading cause of degraded water quality worldwide.

Nitrogen is a nutrient found in all living organisms. But excess nitrogen is a pollutant that is usually carried to water bodies in runoff containing nitrogen-based fertilizers and nitrogen-bearing sewage.

Various species of algae were chosen to represent biodiversity in the study because algae are the primary organisms that take up excess nutrients, such as nitrogen, from streams, lakes and oceans.

The power of niche partitioning

Evidence that these results were produced by niche partitioning includes the domination of differently shaped forms of algae in different types of stream habitats, as predicted by ecological theory. For example, high velocity habitats were dominated by small, single-celled species of algae that grew in ways that were resistant to displacement by the force of fast-moving water. By contrast, low velocity habitats were dominated by large, filamentous algae that were vulnerable to such forces.

In addition, as part of the research, streams were experimentally simplified until they contained just one type of a habitat, and no opportunity for species to express their niches. Results showed that each of these simplified water bodies then collapsed to one dominant species that singularly drove all nitrate uptake, without species diversity influencing such uptake. These result confirmed that niche differences among species provided the mechanism for biodiversity's cleansing ability.

"One of the primary contributions of this study," said Cardinale, "is that I was able to show exactly why streams that have more species are better at removing these nutrient pollutants from the water. It's just one study, but it's part of a growing body of scientific evidence that is now clearly showing that the modern mass extinction of species is going to affect humanity in some big, and important ways."

Cardinale continues, "One of the obvious implications of the study is that if we want to enhance water quality in large bodies of water, like the Chesapeake Bay watershed or around the Great Lakes, then the conservation of natural biodiversity in our streams would offer, among other benefits, help in cleaning them up."

Nevertheless, scientists are currently warning that accelerating species loses may ultimately lead to a mass extinction comparable in magnitude to that which wiped out the dinosaurs--a possibility that certainly threatens the biodiversity of rivers, streams and other water bodies.