Stranglers of the Tropics--and Beyond 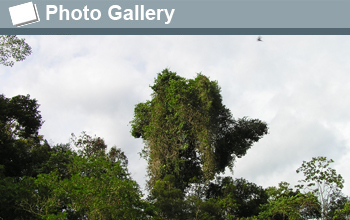 Explore exotic and destructive lianas in this photo gallery.

Kudzu, the plant scourge of the U.S. Southeast.  The long tendrils of this woody vine, or liana, are on the move north with a warming climate.

But kudzu may be no match for the lianas of the tropics, scientists have found. Data from sites in eight studies show that lianas are overgrowing trees in every instance.

If the trend continues, these "stranglers-of-the-tropics" may suffocate equatorial forest ecosystems.

Tropical forests contain more than half of Earth's terrestrial species, and contribute more than a third of global terrestrial carbon and a third of terrestrial net primary productivity, says ecologist Stefan Schnitzer of the University of Wisconsin-Milwaukee.

Schnitzer is co-author with Frans Bongers of Wageningen University in the Netherlands of a paper on lianas in the current issue of the journal Ecology Letters.

Tropical forests are indeed experiencing large-scale structural changes, the most obvious of which may be the increase in lianas, according to Robert Sanford, an NSF program director. The research was funded by the National Science Foundation (NSF)'s Division of Environmental Biology.

Lianas are found in most tropical lowland forests. The woody vines are "non-self-supporting structural parasites that use the architecture of trees to ascend to the forest canopy," says Schnitzer.

Lianas usually have a high canopy-to-stem ratio, says Schnitzer, "which allows them to deploy a large canopy of leaves above those of the host tree, competing aggressively with their hosts for sunlight, water and nutrients."

Intense competition from lianas for above- and below-ground resources limits tropical tree growth and survival.

For example, in a tropical moist forest on Barro Colorado Island, Panama, researchers found that the proportion of liana infestation in the crowns of trees changed from 32 percent in 1967-68 to 47 percent in 1979, to nearly 75 percent in 2007.

The number of trees with severe liana infestation (more than 75 percent of a tree's canopy covered by lianas) increased by 65 percent between 1996 and 2007.

In this forest, liana leaf litter and flower production, compared with that of host trees, increased substantially from 1986 to 2002, says Schnitzer.

In an old-growth forest surrounding the Nouragues Biological Research Station in French Guiana, scientists found that over the decade from 1992 to 2002, the number of lianas shot up while that of trees fell.

In a forest in the central Amazon, biologists discovered that over the six-year-period from 1993 to 1999, new liana seedlings were 500 percent higher than estimates from previous periods whereas tree seedling recruitment decreased.

But a tree need not live in the tropics to fall victim to lianas.

After hurricane damage in a Florida forest, invasive lianas rapidly colonized the damaged trees and persisted for many years afterward, reducing numbers of native trees, shrubs and herbs.

In 50-year-old forests in the Piedmont region of New Jersey, lianas are now abundant.

"A major factor limiting liana abundance in temperate forests is freezing temperatures," says Schnitzer. "Both native and invasive lianas are likely to increase most rapidly in forests that don't have long, cold winters."

For snow-birds--both avian and human--who escape to tropical climes each winter, a strangler-free paradise may be in the woods they left behind.