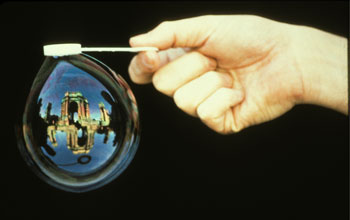 Exploratorium: The museum of science, art and human perception in San Francisco, Calif.

The National Science Board (NSB) announced today that the Exploratorium will receive its 2011 Public Service Award for a group for unique contributions to increasing the public understanding of science and engineering.

The Exploratorium is a San Francisco-based museum that promotes informal education through webcasts, websites and science-based events, including hundreds of hands-on exhibits.

It was founded in 1969 by Manhattan Project experimental physicist Frank Oppenheimer, who, at various times, was also a professor, high school teacher and cattle rancher. While teaching physics at the University of Colorado, Oppenheimer received a grant from the National Science Foundation (NSF) to develop new methods for teachers to use when instructing students in science education. From that followed what he called a "Library of Experiments"-- nearly one hundred models of classic laboratory experiments--that became the inspiration for the Exploratorium.

The museum is a mad scientist's penny arcade, an art studio and an experimental laboratory all rolled into one where visitors can touch, play and tinker with hands-on science. Behind the scenes are youth-development efforts, home-school and after-school programs, arts residencies, media experiments, teaching programs, informal education research and more.

The Exploratorium has seen more than 6,000 teachers participate in professional-development programs, including elementary, middle and high school teachers along with staff developers, school leaders, college professors and after-school professionals from all 50 states.

Additionally, more than 90,000 students and teachers visit the museum while on field trips each year, and another 3,500 students--many from San Francisco's underserved neighborhoods--benefit from the Exploratorium's Educational Outreach program.

The NSB Public Service Award typically goes to one individual and one group each year. The group award honors a company, corporation or organization that has made substantial contributions to increasing public understanding of science and engineering in the United States. Contributions may be in a wide variety of areas that have the potential to contribute to public understanding of and appreciation for science and engineering--including mass media, education and/or training programs, entertainment, etc.

"The Exploratorium is the prototype public science educational institution for people of all ages," said NSB Chairman Ray Bowen. "It stands at the intersection of formal and informal science learning and teaching."

The Public Service Award will be presented to the Exploratorium at a black-tie dinner and ceremony on May 10 at the U.S. Department of State in Washington, D.C. along with the recipient of the Board's Vannevar Bush Award, Charles Vest from the National Academy of Engineering and the recipient of the NSB's Public Service Award for an individual. The National Science Foundation's Alan T. Waterman Awardee, Casey Dunn of Brown University, will be honored that evening with his award, as well.

The NSB is the 25-member policymaking body for the National Science Foundation and advisory body to the president and Congress on science and engineering issues.

Drawn from universities and industry, and representing a variety of science and engineering disciplines and geographic areas, NSB members are selected for their eminence in research, education or public service and records of distinguished service. The NSB has 24 members that serve six-year terms. The 25th member is the NSF director, an ex officio member of the NSB.

Visit the NSB's website for more background information on its current composition.