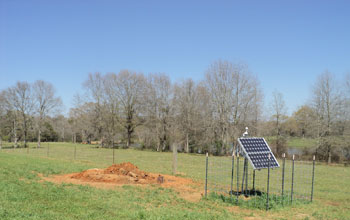 EarthScope Transportable Array Station 345A is about 15 miles northwest of Columbia, Miss.

Most seismic activity--and earthquakes--have been in the U.S. West. But the East is not out of the woods in terms of risk, geologists say.

Station 345A, located on a private farm about 15 miles northwest of Columbia, Miss., will operate for the next two years, continuously recording ground motion from local, regional and global earthquakes.

The Transportable Array is part of the National Science Foundation (NSF)-funded EarthScope project, an integrated Earth science effort to explore the structure, evolution and dynamics of the North American continent.

EarthScope has additional support from NASA and the U.S. Geological Survey. The Transportable Array is constructed, operated and maintained by the Incorporated Research Institutions for Seismology (IRIS) as part of EarthScope.

"Research using data from the Transportable Array has already improved our understanding of the structure and dynamics of the western United States," says Greg Anderson, NSF program director for EarthScope.

"With the arrival of the Transportable Array in the eastern United States," Anderson says, "scientists will derive new insights about the older core of our continent and processes related to the formation and modification of continents over geologic time."

Because the Western part of the country regularly experiences earthquakes that can be felt, "the region has dozens of permanent seismometers to observe fault movements," says Bob Woodward, director of the USArray, the seismic component of EarthScope.

"Seismic stations east of the Mississippi River are much less common."

Each station is a stand-alone system with a seismometer and electronic equipment installed about six feet below ground and solar panel and communications equipment at the surface.

Most Transportable Array stations, like 345A, have been installed on private land; the landowners serve as volunteer hosts and are enthusiastic about advancing knowledge of Earth's inner workings.

To date, Transportable Array stations have been installed in more than 1,100 locations, out of an expected 1,600 by the end of the first ten years of EarthScope in 2013.

These stations have recorded over 22 terabytes of data that are freely available to Earth scientists, educators and the public across the U.S. and around the world.