It's Earth Week. Just In Time, Thousands of Hectares of Tropical Forest Are Saved 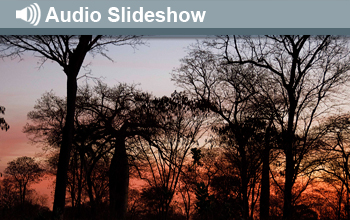 Thousands of hectares of tropical dry forests in the Brazilian state of Minas Gerais are now safe from logging, thanks to scientists affiliated with a project called Tropi-Dry.

Using information from Tropi-Dry, the members of the Superior Court of Minas Gerais unanimously overturned a state law that altered the status of more than 16,000 square kilometers (6,000 square miles) of tropical dry forests, leaving them unprotected.

Loss of these forests would have posed a serious threat to biodiversity and ecosystem services, including weather regulation and water production in Brazil's second-largest watershed, the Sao Francisco River.

Tropi-Dry is led by Arturo Sanchez-Azofeifa of the University of Alberta in Canada.  It brings together researchers in conservation biology, ecology, remote sensing and geographic information systems, sociology, anthropology, policy analysis and forestry to develop a "state of the art" understanding of tropical dry forests in the Americas.

The project is funded by the Inter-American Institute (IAI), an intergovernmental organization supported in large part by the U.S. National Science Foundation (NSF).

"This effort clarified a forest area's classification in a way that brought it back under the purview of existing laws in Brazil and led to the protection of an endangered biome," says Paul Filmer, NSF program director for IAI, which is funded by NSF's Directorate for Geosciences.

A biome is an ecosystem characterized by distinctive plant and animal species that have developed and are maintained under specific soil and regional climatic conditions.

"The emphasis on preservation of the Amazonian biome--over the many other biomes present in South America--has led to the exploitation of neglected areas," Filmer says. "This is a major loss, as there are many critical ecological functions carried out by other biomes, functions that buffer the human-inhabited areas they surround."

Although tropical dry forests may receive significant rainfall each year, they have long dry seasons that last several months, causing many of the trees to drop their leaves.

Seasonal droughts drive the workings of tropical dry forests and have widespread effects on all living things there, says Sanchez-Azofeifa.

The court's decision is a significant victory for the protection of this and other endangered ecosystems outside the Amazon Basin, says Sanchez-Azofeifa. The decision opens the door for future conservation strategies that protect tropical dry forests in Brazil and elsewhere.

The state law would have allowed a 70 percent clearing of Minas Gerais' forests for economic purposes, and would have provided limited, temporary fiscal benefits to a handful of large investors, researchers found.

These data provided convincing evidence that the forests re-designated under the state law are protected by Brazil's federal law, which takes precedence.

"Many years of ecological and social science research conducted by Tropi-Dry project members and aimed at understanding the human and ecological dimensions of the Minas Gerais biome, clearly show that these forests belong in the federally protected category," says Sanchez-Azofeifa.

"With the substantial documentation we provided, lawyers were able to present a convincing argument that federal protection should extend to these forests," says Marcos do Espirito Santo.

"Once the scientific data had established that the dry forest of Minas Gerais is an extension of the Atlantic forest, federal precedence could be asserted," says Santo. "The Tropi-Dry data were key to this success."

"It's the IAI's mandate to fund research that provides sound scientific knowledge on issues of global change," says Holm Tiessen, director of the IAI.

"The information provided to the appeals court is an excellent example of the need for such data: complex issues related to biodiversity, ecosystem function and the sustainability of the coupled natural-human environment were analyzed and presented to the court in such a way that informed decision-making was possible. "

It's particularly heartening, Tiessen says, "that it was possible to draw attention to the fate of an ecosystem and the services it provides, that's far away from the much-debated tropical rainforest."

Indeed, not all forests in the tropics are rain-soaked. Many of the most important tropical forests, this research shows, are dry.

Their loss would leave behind little but thorny shrublands, thickets or arid grasslands, with significant climate and food security issues for highly populated areas in the Americas.

"The U.N. has designated 2011 as the Year of Forests," says Filmer. "Through the efforts of the IAI and projects like Tropi-Dry, tropical dry forests may become as well-known as their rainforest counterparts."

Tropi-Dry's research sites include the Serra do Cipo National Park and Parque Estadual da Mata Seca in Minas Gerais, Brazil and Patos in Pernambuco, Brazil; the Santa Rosa National Park in Costa Rica; the Chamela-Cuixmala Biosphere Reserve in Mexico and the Hato Pinero in Venezuela.