Precipitation and predators key in ecological regulation of infectious disease 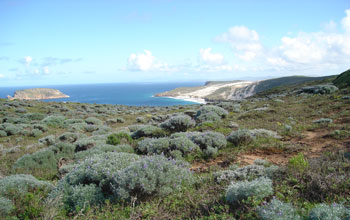 A little information can go a long way when it comes to understanding rodent-borne infectious disease, as shown by a new study led by scientist John Orrock of the University of Wisconsin-Madison and colleagues.

The researchers studied wild deer mouse populations on the Channel Islands off the southern coast of California.  The mice carry a variant of hantavirus--a disease spread by rodents--called Sin Nombre virus.

Results of the study appear in the May issue of the journal American Naturalist.

They show that just three ecological factors--rainfall, predator diversity and island size and shape--can account for nearly all the differences in infection rates between the eight islands.

The study also provides some of the first evidence to support a recent hypothesis that predators play an important ecological role in regulating disease--sometimes known as the "predators are good for your health" hypothesis.

"These findings support an emerging consensus that ecological factors such as food web structure and species diversity play a key role in determining the prevalence of zoonotic diseases and human health risk," says Alan Tessier, program director in the National Science Foundation's (NSF) Division of Environmental Biology, which funded the research.

An outbreak of Sin Nombre virus in 1993 in the Four Corners area of the U.S. Southwest killed several people and brought national attention to the disease.

Learning what factors control the prevalence and spread of viruses like Sin Nombre within host populations is crucial for understanding the risks of animal-borne diseases.

"The ecological underpinnings of disease prevalence, its dynamics in natural populations and its transmission from animals to humans are important links that are still being deciphered," says Orrock.

Mouse populations on the Channel Islands have some of the highest rates of Sin Nombre virus ever measured.

That, coupled with the isolation and well-defined food webs of the islands, makes them a good system to study what ecological factors affect the presence of the virus.

"The prevalence of disease was found to be a function of ecological variables that humans can measure," Orrock says. "What this illustrates is that if you know just a few things, you can have a reasonable shot of predicting the disease prevalence."

Working with Brian Allan from the University of Illinois at Urbana-Champaign and Charles Drost from the U.S. Geological Survey's Southwest Biological Science Center, Orrock mined an existing dataset.

The data were collected on the Channel Islands shortly after the Four Corners outbreak, to look for relationships between biological and physical island characteristics and the prevalence of Sin Nombre on each of the eight islands.

The researchers found that 79 percent of the variation in disease prevalence among the islands could be explained by a single factor--average annual precipitation.

Adding in the physical characteristics of the islands and the number of predators accounted for a total of 98 percent of the variation.

The results also suggest that more diverse predator populations could help keep animal-borne diseases in check--an important lesson as top predators like wolves and bears increasingly disappear from ecosystems due to habitat loss and conflicts with humans.

The authors note that future studies should use experimental methods and examine larger systems to evaluate the generality of the observed patterns.

Nonetheless, the strength of the associations they found on the Channel Islands is striking.

"What's shocking about these data is how tight the relationship is," Orrock says.

"Rarely in ecology do you find that one variable will explain 79 percent of the variation in anything.

"The fact that precipitation does here, and that adding the effects of predator richness and island characteristics explains nearly all the variation in disease prevalence on these eight islands, suggests that we're getting to the heart of some basic ecological principles."