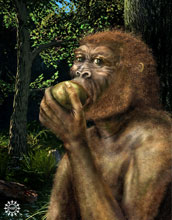 View a video on the diets of early hominids and an interview with Peter Ungar of the University of Arkansas.

An ancient, bipedal hominid needs a new nickname. Paranthropus boisei, a 2.3 million to 1.2 million-year-old primate, whom researchers say is an early human cousin, probably didn't crack nuts at all as his common handle suggests.

"Nutcracker Man" most likely ate grass and possibly sedges, said geochemist Thure Cerling, lead author of a study published in the May 2 online edition of the journal Proceedings of the National Academy of Sciences.

Cerling, a professor of Geology and Geophysics at the University of Utah, and colleagues determined P. boisei's diet by analyzing carbon isotope ratios in the tooth enamel of 24 teeth from 22 P. boisei's individuals. The hominid's diet has been a source of scientific debate because his powerful jaws, huge molars and big, flat cheek teeth indicated he probably fed on nuts and seeds or roots and tubers found in the savannas throughout Eastern Africa.

But, a few years ago, National Science Foundation sponsored research, led by anthropologists at the University of Arkansas in Fayetteville, highlighted inconsistencies with the common view by analyzing scratches and wear marks on P. boisei's teeth.

That team concluded the wear marks were more consistent with modern-day, fruit-eating animals than with most modern-day primates. Now, Cerling as his team confirm P. boisei wasn't a big fan of nuts.

"Wherever we find this creature, it is predominantly eating tropical grasses or perhaps sedges," he said.

The isotope analysis indicated P. boisei individuals preferred C4 grasses and sedges over C3 trees, shrubs and bushes. The findings showed their diets averaged about 77 percent C4 plants, ranging from a low of 61 percent to a high of 91 percent.

That's statistically indistinguishable from the grass diets of grazing animals that lived at the same time: the ancestors of zebras, pigs, warthogs and hippos, said Cerling.

"They were competing with them," he said. "They were eating at the same table."

"Frankly, we didn't expect to find the primate equivalent of a cow dangling from a remote twig of our family tree," said study co-author Matt Sponheimer, anthropology professor at the University of Colorado Boulder.

"Fortunately for us, the work of several research groups over the last several years has begun to soften prevailing notions of early hominid diets. If we had presented our new results at a scientific meeting 20 years ago, we would have been laughed out of the room."

The researchers report the findings in a paper titled, "Diet of Paranthropus boisei in the Early Pleistocene of East Africa." The National Science Foundation's Physical Anthropology Program provided funding for the research.

Other authors included Emma Mbua, Frances Kirera, Fredrick Manthi and Meave Leakey from the National Museums of Kenya, Fredrick Grine from Stony Brook University in New York and Kevin Uno from the University of Utah.