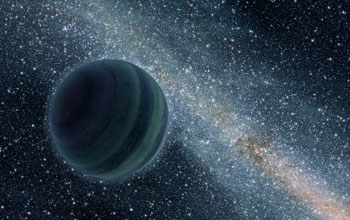 View an animation showing how the free-floating Jupiter-mass planets are found.

Freelance writer Robert Brault offers a metaphor for the night sky, "A trillion asterisks and no explanations." By supporting astronomers, the National Science Foundation (NSF) helps to provide explanations. A recent NSF- and NASA-funded study provides one more explanation.

Astronomers have discovered a new population of Jupiter-size planets floating alone in the dark of space, away from the light of a star. According to the scientists, these lone worlds were probably ejected from developing planetary systems.

The discovery is based on a joint Japan-New Zealand survey, the Microlensing Observations in Astrophysics (MOA), that scans the center of our Milky Way galaxy every year. Using data collected between 2006 and 2007, these reseachers turned up evidence for what now appear to be 10 free-floating planets roughly the mass of Jupiter.

Sometimes called "orphan" planets, these isolated orbs have long been the subject of science theories and science fiction, but their existence remained uncertain until now.

The new findings not only demonstrate that free-floating planets are out there in space, but also suggest they are common. For every star in our galaxy, the research team says there are about two free-floating Jupiter-mass planets, and possibly even more Earth-mass ones though planets this small were not detected.

"There are hundreds of billions of stars in our galaxy," said David Bennett, a NSF- and NASA-funded co-author of the study from the University of Notre Dame in South Bend, Ind. "We think free-floating gas giant planets are at least as numerous as planets orbiting stars, and more common than stars. Our present survey is not sensitive to planets less massive than Jupiter and Saturn, but theories suggests that lower mass planets like Earth should be ejected from their stars more often and are thus more common."

Details of their findings appear in the May 19 issue of the journal Nature. The lead author is Takahiro Sumi, who is currently at Osaka University in Japan.

Previous observations have spotted free-floating planet-like objects within star-forming clusters, with masses low as roughly three times that of Jupiter. Scientists debate over whether these gaseous bodies form like stars or planets. Small, dim stars called brown dwarfs form like stars, growing from collapsing balls of gas and dust, but they lack the mass to ignite their nuclear fuel and shine with starlight. It's possible that brown dwarfs could be as small as planets.

It's also possible that planets get the "boot" from their early solar systems, a rambunctious time when growing planets can be ejected from their orbits due to close gravitational encounters with other planets or stars. Without a star to circle, these planets would move through the galaxy as our sun and others stars do, in stable orbits around the galaxy's center. The fact that the new survey found 10 free-floating Jupiters supports the "ejection" scenario, though it's possible that both mechanisms are at play.

"If free-floating planets formed like stars then we would have expected to see only 1 or 2 of them in our survey instead of 10," said Bennett. "The results suggest that planetary systems often become unstable, with planets being kicked out from their places of birth."

The survey--MOA--uses a 1.8-meter telescope at Mt. John University Observatory in New Zealand to regularly scan the copious stars at the center of our galaxy for what are called microlensing events.

These events occur when something, such as a star or planet, passes in front of another more distant star. The passing body's gravity warps the light of the background star, causing it to magnify and brighten.

Heftier passing bodies, such as massive stars, will warp the light of the background star to a greater extent, resulting in brightening events that can last weeks. Small planet-size bodies will cause less of a distortion, and brighten a star for only a few days or less.

The astronomy team found about 10 short microlensing events indicating free-floating planets of roughly Jupiter's mass. They said that they cannot rule out that some of these planets may be in very distant orbits about stars, but other research indicates that Jupiter-mass planets in such distant orbits are rare.

According to models of how common stars are in our galaxy, this new population of free-floating Jupiter-size planets outnumbers stars in our galaxy by nearly a factor of two. Likewise, the researchers say the free-floating planets may get kicked out of their solar systems at such high rates to be at least as common as planets like ours that orbit a star.

Based on these predictions, our galaxy may host hundreds of billions of the lone worlds. The new survey is like a population census--by sampling a portion of the galaxy, and knowing the constraints of the survey, researchers can estimate the prevalence of free-floating worlds.

A second microlensing survey group, the Optical Gravitational Lensing Experiment (OGLE) contributed to this discovery. The OGLE group also observed many of these same microlensing events, and their observations independently confirmed the analysis of the MOA group. The late Bohdan Paczynski was instrumental in instigating the highly cooperative nature of the gravitational microlensing field, by encouraging OGLE and the other groups to share their data as soon as soon as it is taken. This has been important for many microlensing discoveries, and is in part, why MOA contacted OGLE to confirm the results and to write up a joint paper.