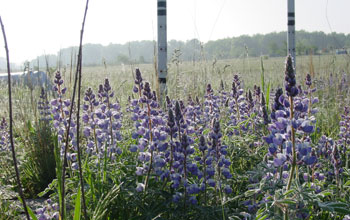 Yarrow, it's called, this flowering plant also known as "little feather" for the shape of its leaves. Prized as a garden plant that repels unwanted insects while attracting beneficial ones, it also improves soil quality and is used in many herbal medicines.

Now yarrow--and 12 other grassland species, including Indian grass, thimbleweed and wild lupine--may have a larger role, scientists have found: as players in Earth's changing climate.

Researchers from the University of Wisconsin-Eau Claire and University of Minnesota-Twin Cities conducted an 11-year experiment with 13 plant species common in U.S. Midwestern states.

The results suggest that plants' capacity to absorb extra carbon from the atmosphere as CO2 levels rise may be less than expected.

The findings are published in the current issue of the journal Global Change Biology.

"They have major implications for models of future climate," says Peter Reich, a forest ecologist at the University of Minnesota and co-author of the paper. "Current state-of-the-art climate models assume that vegetation will soak up much of the extra CO2 we put into the air from fossil fuel burning."

But the new results, says biologist Tali Lee of the University of Wisconsin-Eau Claire and first author of the paper, "show that the capacity of some terrestrial ecosystems to absorb the extra CO2 may be less than the models assume."

That means that today's carbon cycle models likely underpredict the pace of increase of future CO2 levels, and therefore the pace of climate change, say Lee, Reich and Susan Barrott of the University of Minnesota, also a co-author of the paper.

"What this all boils down to," says Reich, "is that the world could warm even faster than we thought."

"Now we have convincing evidence that the photosynthesis of typical grassland species will not respond as we had thought," says Gholz. "The cautionary implications for global climate models are clear."

The researchers measured gas exchange rates of the 13 grassland species over 11 years using free-air CO2 enrichment at 180 parts per million, or ppm, above ambient CO2 levels. Their work is part of the BioCON experiment in Minnesota.

The experiment is located at NSF's Cedar Creek Long-Term Ecological Research (LTER) site, one of 26 such NSF LTER sites around the world.

BioCON consists of 371 two-meter by two-meter plots, arranged in six circular areas or "rings," each 20 meters in diameter and containing 61, 62, or 63 plots. Sixteen species of perennial prairie species, native or naturalized to the Cedar Creek area, are planted there.

Some BioCON plots are enriched with added CO2 and nitrogen, while others are not.

The 11 years of exposure produced consistent increases in leaf photosynthesis in the 13 species studied, compared with plants grown at ambient CO2 concentrations.

But those increases are, on average, at rates of about 10 percent. Previous similar studies at other locations had found results of some 25 percent.

The new findings are independent of the supply of nitrogen, which acts as a fertilizer for the plants.

"Carbon cycle models that assume and thereby simulate long-lived strong enriched CO2 stimulation of photosynthesis [greater than 25 percent] for all of Earth's terrestrial ecosystems," state the scientists in their paper, "should be viewed with a great deal of caution."

When it comes to how plants will respond in a higher-CO2 world, says Reich, "we need to take a much closer look."