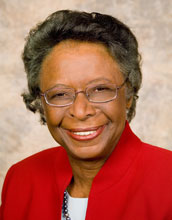 Editor's Note: On June 22, 2011, Cora Marrett was sworn in by NSF Director Subra Suresh at the agency's Arlington offices.

Dr. Marrett was confirmed by the U.S. Senate on May 26 to serve as Deputy Director of the National Science Foundation (NSF). She is the 12th deputy of the foundation. Marrett was nominated for the NSF deputy director position by President Obama on August 5, 2010, and then re-nominated in the new Congress on January 5, 2011.

"Dr. Marrett is a familiar leader at the agency, and her continued commitment to NSF's mission makes her well suited for this role," said NSF Director Subra Suresh. "The agency will truly benefit from her years of experience at both the federal and university levels."

Marrett has served as the senior advisor for Foundation Affairs since February 2011. She served as NSF acting director when Arden L. Bement resigned in June 2010, and before Suresh was confirmed as NSF director in October.

Previously, Marrett served as the assistant director for NSF's education and human resources (EHR) directorate from 2007-2009. While there, she led the directorate to support NSF's mission to achieve excellence in U.S. science, technology, engineering and mathematics (STEM) education at all levels and in both formal and informal settings.