Impact on ocean food webs likely to increase in the future 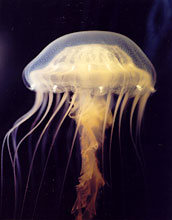 Chrysaora quinquecirrha, one of two jellyfish species in the study.

Jellyfish can be a nuisance to bathers and boaters in the Chesapeake Bay on the United States' East Coast and many other places along the world's coasts.

A new study by researchers at the Virginia Institute of Marine Science (VIMS) shows that jellyfish also have a more significant impact, drastically altering marine food webs by shunting food energy toward bacteria.

An apparent increase in the size and frequency of jellyfish blooms in coastal and estuarine waters around the world during the last few decades means that jellies' impact on marine food webs is likely to increase in the future.

The results of the study, led by recent VIMS graduate Rob Condon--now a scientist at the Dauphin Island Sea Lab (DISL) in Alabama--appear in this week's issue of the journal Proceedings of the National Academy of Sciences.

"This intriguing finding demonstrates that changes at the top of the food web can affect even the most fundamental ecosystem processes," says David Garrison, director of NSF's Biological Oceanography Program.

Condon conducted his field studies by sampling jellyfish blooms in the York River, a tributary of lower Chesapeake Bay.

The team's experimental work took place in laboratories at VIMS, and in Canada and France.

The researchers tracked the flow of food energy in the lab by measuring the amount of carbon taken up and released by jellyfish and bacteria within closed containers during "incubation" experiments of varying length. Carbon is the "currency" of energy exchange in living systems.

"Jellyfish are voracious predators," says Condon. "They affect food webs by capturing plankton that would otherwise be eaten by fish, and converting that food energy into gelatinous biomass. This restricts the transfer of energy up the food chain, because jellyfish are not readily consumed by other predators."

Jellyfish also shunt food energy away from fish and shellfish that humans like to eat through their effects on the bacterial community.

"Marine bacteria typically play a key role in recycling carbon, nitrogen, phosphorus and other by-products of organic decay back into the food web," says Condon.

"But in our study, we found that when bacteria consumed dissolved organic matter from jellyfish they shunted it toward respiration rather than growth."

The upshot of this "jelly carbon shunt" is that bacteria in jelly-laden waters end up converting carbon back to carbon dioxide, rather than using it to grow larger or reproduce.

This means the carbon is lost as a direct source of organic energy for transfer up the food web.

The researchers think the shift toward bacterial respiration happens because jellyfish produce organic matter that is extra-rich in carbon.

They do so through excretion and the sloughing of mucus. "The mucus is the slime you feel when you pick up a jelly," says Steinberg.

That compares to a ratio of 6 parts carbon to 1 part nitrogen for the organic matter found dissolved in typical marine waters.

"The bacteria metabolized this carbon-rich material two to six times faster than they did with dissolved organic matter from water without jellyfish," says Condon.

"This rapid metabolism shunted carbon toward respiration rather than production, reducing their potential to assimilate this material by 10 to 15 percent."

A final significant finding from the team's research is that an influx of dissolved organic matter from jellyfish blooms changes the make-up of the local microbial community.

"Dissolved organic matter [DOM] from jellyfish favored the rapid growth and dominance of specific bacterial groups that were otherwise rare in the York River," says Condon.

"This implies that jelly-DOM was channeled through a small component of the local microbial assemblage and thus induced large changes in community composition."

Overall, says Condon, the team's findings "suggest major shifts in microbial structure and function associated with jellyfish blooms, and a large detour of energy toward bacteria and away from higher trophic levels."

He adds that a host of factors, including climate change, over-harvesting of fish, fertilizer runoff and habitat modifications could help to fuel jellyfish blooms into the future.

"Indeed," he says, "we've seen this already in Chesapeake Bay. If these swarms continue to emerge, we could see a substantial biogeochemical impact on our ecosystems."

"Simply knowing how carbon is processed by phytoplankton, zooplankton, microbes or other trophic levels in space and time can lead to estimates of how much carbon energy is available for fish to consume," he says.

"The more we know, the better we can manage ecosystem resources."