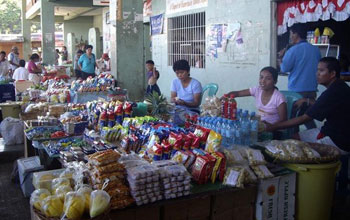 Small loans, somewhere in the neighborhood of $100 to $500 dollars, are an increasingly popular weapon in the fight to reduce poverty. Called microcredit, institutions dole out these monetary advances to help extremely poor people engage in successful entrepreneurship and improve their quality of life.

While proponents extol its virtues, researchers look for evidence; they want to know if it works. Does it really increase financial development and help individuals make solid monetary decisions as its supporters claim?

"Microfinance works," said Dean Karlan, economics professor at Yale University. "But it isn't the Hollywood ending that we've been sold."

Karlan, coauthor of a recent book More Than Good Intentions that also discusses research on this topic, and Jonathan Zinman, an economics professor at Dartmouth College in Hanover, N.H., recently published the results of a 22 month study that examined how individuals make economic decisions over time and whether micro-lending policies aid economic development.

"Proponents argue microcredit mitigates market failures, spurs microenterprise growth and boosts borrowers' well-being," the researchers write in a report, which appears in the June 10 issue of Science. The National Science Foundation's Division of Social and Economic Sciences funds the work.

The researchers found "microloans increase ability to cope with risk, strengthen community ties and increase access to informal credit." But they also found the subjective well-being of loan awardees slightly declined. In addition, they found awardees reduced their overall number of business activities and those in the study did not increase investment in their businesses.

"Enterprise growth is the canonical story that the microcredit industry promotes," said Karlan about the amount of financial investment. "This isn't to say that microcredit never produces such an impact. But it should not be seen as the singular story. We need to know more about how people actually use their loans, and we should not be judgmental if the answer is not always for investment in enterprise."

"Traditional" microlenders target women who operate small-scale businesses and use group lending mechanisms.  But the expansion of microlending means it often ends up looking more like traditional retail or small business lending that has the same impact on women and men.

Optimism, calmness, worry and job satisfaction was about the same for both men and women in the study. "We do not find any evidence that treatment effects are more pronounced for female borrowers," the researchers write.

Treatment effects refer to the financial and psychological outcomes of the mircoloans.

Karlan and Zinman designed an innovative experiment that randomly assigned individual microloans of, on average, $225 through credit scoring to 1,601 individuals in the Philippines. The loans, assigned to microentrepreneurs, were short-term and were required to be repaid on fixed schedules with equal periodic repayments.

The research design employed credit scoring software to approve loans randomly for marginally creditworthy applicants and then used survey data to measure how the loans impacted the awardees' later access to credit.

By randomizing the marginal credit decisions, Karlan and Zinman were able to measure the impact of the loans, screening off other causal factors. Moreover, these standard, first-time-borrower loans were made through a lender that had no ties to the survey firm--important for eliminating potential bias.

Loans were to be paid back in 13 weeks, with weekly repayments and a monthly interest rate of 2.5 percent charged over the declining balance. But several upfront fees combined with the interest rate to produce an effective annual interest rate greater than 60 percent.

Karlan and Zinman say the high annual interest rate may have contributed to a marginal improvement in risk management. "We do find that microloans increase ability to cope with risk," they write, "strengthen community ties, and increase access to informal credit. Thus microcredit may work, but through different channels often hypothesized by its proponents."

Informal credit was loans provided by family members and friends. The researchers found awardees had greater access to these loans once they had been the recipient of a microcredit loan.

"Access to credit lowered the demand for risk mitigation tools elsewhere," said Karlan. "We also found a similar result in our earlier South Africa study, in which individuals with access to credit were more able to keep their jobs--more able to absorb some sort of shock, which if they did not absorb would have meant losing their job."

Karlan is the president and founder of Innovations for Poverty Action, a non-profit organization that seeks to bridge the gap between academia and economic development policy. Zinman is a research affiliate of the organization.

"The biggest lesson we see here is one of process, and of shedding ourselves of preconceived notions on what credit is for," said Karlan. "People use credit for many reasons, beyond business investment, and that is good."

"What we need now is more studies like this that help understand the patterns of how credit is used, and if credit is being used to alleviate poverty, then we need further studies to learn how and when that happens."