Findings have implications for learning strategies 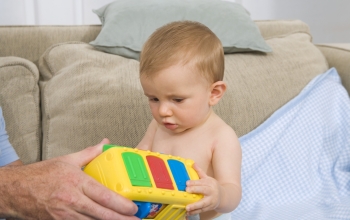 Infants infer whether a toy fails to work because of their actions or a reason beyond their control.

Using a very small amount of statistical information, 16-month-old infants can distinguish between the influence of their own actions and the impact of the outside world, new research concludes.

The findings, published in this week's journal Science, give researchers insight into how infants integrate prior knowledge with a handful of statistical data to make accurate inferences about the causes of a failed action.

Research conducted by Hyowon Gweon and Laura Schulz, both with the Massachusetts Institute of Technology's Department of Brain and Cognitive Sciences, showed that infants are able to make accurate judgments about whether a toy failed to operate due to their own mistake or due to circumstances beyond their control.

Making such distinctions is a common, yet critical part of cognition. "If we try to turn on a light and are left in the dark, did we do something wrong (e.g., flip the wrong switch), or is something wrong in the world (e.g., a bulb burned out)?" the researchers write in their report, giving an every-day example of how people assign causal responsibilities to themselves or to the external world.

Understanding how these distinctions are made can help develop learning strategies for both children and adults.

The study, "16-month-olds Rationally Infer Causes of Failed Actions," was funded by the Research and Evaluation on Education in Science and Engineering (REESE) program in the National Science Foundation's Directorate for Education and Human Resources (EHR).

"These results run contrary to assumptions that prevailed in education for decades that young children were unable to distinguish among causes in this manner," said Gregg Solomon, cluster coordinator for the REESE program in EHR's Division of Research on Learning, "and it has implications for curricular design in early childhood."

Gweon and Schulz examined how babies react to situations in which their actions fail to produce an expected outcome. In one condition, babies saw a toy that played music when one experimenter pushed a button on the toy, but the toy failed when a second experimenter tried. This pattern of evidence suggested to the infant that the failure was due to the second experimenter or agent.

In another condition, the button pressed sometimes activated the toy and sometimes failed to activate for each of the two experimenters. This suggested that something was wrong with the toy. In both conditions, when infants were given the toy, they were never able to activate it.

The researchers hypothesized that infants would use the statistical evidence to consider the plausibility of two explanations--that they were doing something wrong or that the toy was broken--and determine which was most likely.

Depending on the circumstances of the experiment, the babies responded differently, indicating that they were able to weigh evidence for each explanation and react accordingly. Infants who saw evidence suggesting the failure was due to their own action tried to hand the toy to their parents for help. Conversely, babies who saw evidence suggesting that the toy was broken were more likely to reach for a new toy, as another one was always nearby.

"That's the amazing thing about what the babies are doing," said Schulz. "They can use very, very sparse evidence because they have these rich prior beliefs and they can use that to make quite sophisticated, quite accurate inferences about the world."

"It was fascinating to see that they are even sensitive to this problem of figuring out whether it's them or the world to begin with," added Gweon, "and that they can track such subtle statistical dependence between agents, objects and event outcomes to make rational inferences."

Although this study is conducted with babies, the results have implications for how humans in general learn about the world. "The results support the idea that humans are rational learners armed with a powerful mechanism for making inductive inferences," said Gweon.

The infants' choice of actions between asking for help and exploring another toy has implications for the trade-off between two strategies for learning: learning socially from others and learning from exploration.

"Indeed, assumptions about how children explore the world and what causal inferences they draw underlie a range of approaches to the development of instructional materials and teacher education," Solomon said.

"It's surprising that these young infants can already rationally navigate between the two choices and choose the more informative source of information depending on where they attribute the cause of the failure," said Gweon.