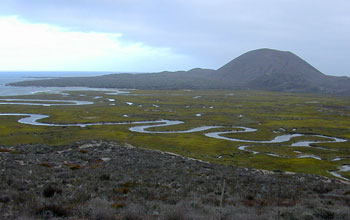 Overview of Bahia Falsa in Mexico, one of the estuaries where scientists conducted the study.

Animal species all follow the same rule for how common they are in an ecosystem, scientists have discovered. And the rule is simple.

Everything from birds to fishes, crabs to snails to worms, and the parasitic animals that live inside or on them, follows it.

"You can predict how common something might be just by knowing its body weight--how big an individual is--and how high up the food chain it is," says biologist Ryan Hechinger of the University of California at Santa Barbara (UCSB), lead author of a paper in this week's issue of the journal Science.

"Extracting such simplicity from complexity will allow scientists to better understand and manage all natural systems from forests, to lakes, to ocean fisheries," Scheiner says.

Body size is important because it's connected to how much food an animal needs--to how many calories it burns, says Hechinger.

Bigger animals burn more calories. Because each individual needs more food, there aren't as many big animals as small animals.

But the food chain is also important. The higher up the food chain, the less food there is and the less common an animal species is--whether it's big or small--a bird or a parasitic worm.

"Paying attention to parasites at the same time as other animals is key to the results," says Hechinger.

Parasites are at least half of all biodiversity, he says. But ecological science usually ignores parasites.

"If we want to understand how life works, how species make their living, how can we do that if we don't look at most species--the parasites?" asks Hechinger. "Including parasites in our study let us see the true patterns in nature."

Keeping parasites in mind, and the way they are different than predators, helped the scientists develop a theory that works for all types of life, parasites or not.

Parasites provide a great way to test and expand general ecological science, Hechinger and co-authors believe. Co-authors of the paper are Kevin Lafferty of UCSB and the U.S. Geological Survey Western Ecological Center; Andy Dobson of Princeton University; James Brown of the University of New Mexico; and Armand Kuris of UCSB.

"We found that the amount of biomass produced by a population doesn't depend on the body size of a single animal in that population, and doesn't seem to depend on the type of animal," says Hechinger. But it does depend on how high up the food chain it is.

Birds or fishes, crabs or parasites can all make the same amount of biomass each year, he says.

If this rule is general, the scientists believe, it means that species such as deer and aphids, which both eat plants, can make the same biomass every year.

And mountain lions and the tape worms that both feed on deer can make the same biomass.

But that biomass production will be lower than the deer's, because the mountain lion and the tape worm are higher up the food chain.