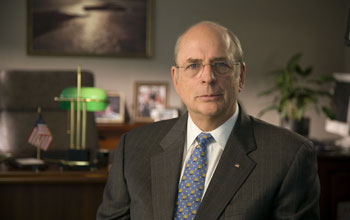 Norm Augustine, the former Chair of the National Academy of Engineering, will lead an upcoming strategic review of U.S. science-support operations on the continent of Antarctica and the Southern Ocean the Office of Science and Technology Policy (OSTP) and National Science Foundation (NSF) announced today.

Augustine, who served on the President's Council of Advisors on Science and Technology during both Democratic and Republican administrations, led the last such review in 1997. He also has led a number of other high-profile commissions regarding national priorities in science and technology domains.

The United States has supported research activities in the Antarctic for more than 50 years through programs funded and managed by NSF, including the maintenance of year-round facilities and temporary field sites and the operation of ice-capable research vessels off the polar coasts.

Observations and experiments conducted on and surrounding the continent's rugged environment have generated seminal insights into atmospheric and ocean processes, the biology of ancient life, the origins of the universe and a wide range of other topics.

To ensure that the nation remains on a robust and sustainable path to conducting the most important research on the planet's coldest, driest and most remote continent and in the surrounding ocean, the United States has periodically supported independent reviews of the science program there, the last of which was 14 years ago.

Today, several factors warrant a fresh review of the program: the growing availability of new remote observing technologies and other advances that can improve efficiencies for those conducting research in Antarctica's extreme environment and changes in the region due largely to climate change, the effects of which are amplified near the Earth's poles.

"The Obama Administration strongly supports the U.S. Antarctic Program and understands its importance in America's conduct of international diplomacy, polar scientific endeavors, science leadership, and exploration of this vast continent and its surrounding seas," said John P. Holdren, assistant to the president for science and technology and director of OSTP. "The Administration's goal is to ensure that these important research programs remain on a strong and stable footing well into the 21st Century, and this review will be crucial to meeting that goal."

The U.S. Antarctic Program Blue Ribbon Panel that Augustine will lead will review the current U.S. Antarctic Program to ensure that the nation is pursuing an optimal long-term strategy for conducting science and diplomacy in Antarctica. The panel will aim to identify and characterize a range of options for supporting and implementing U.S. priorities in Antarctica, including scientific progress, international collaboration, maintenance of a strong American presence, efficient operations and good stewardship of the Antarctic environment.

Building upon an ongoing National Research Council study that will describe future Antarctic science needs, the panel will work closely with the NSF and other federal agencies and will seek input from Congress, the White House, the public, industry, and international partners as it develops its options. It will present its results in time to support administration decisions on ways forward by early 2012.

"I am confident that this review will serve the Nation well by evaluating NSF's current Antarctic infrastructure, examining opportunities for international infrastructure collaborations, examining future requirements for maintaining permanent stations and other infrastructure, and reviewing management and logistical options for supporting anticipated scientific operations over the next 20 years," said NSF Director Subra Suresh.

Augustine said he looks forward to leading the expert panel, the members of which will be named in the weeks ahead.

"It is an honor to be asked to lead this important scientific program review," said Augustine, who in addition to being a former aerospace industry executive is a recipient of the National Medal of Technology, the Joint Chiefs of Staff Distinguished Public Service Award, and the Department of Defense's Civilian Distinguished Service Medal, and has served as chair of the American Red Cross and President of the Boy Scouts of America. "I am a firm believer in the value of this nation's research enterprise and will do everything I can to provide the information needed to help the country maintain its scientific leadership and excellence in this remote but exceedingly important part of our planet."