Statement by Karl A. Erb, Head of the National Science Foundation's Office of Polar Programs, on the Death of Caleb Pungowiyi

“A world-class ambassador for Alaska and Arctic Indigenous peoples” 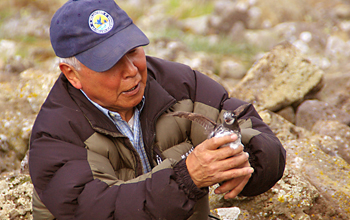 Caleb Pungowiyi, near the village of Savoonga, Alaska, on St. Lawrence Island.

As the head of the National Science Foundation's Office of Polar Programs, I wish to express my profound regret--and the regret of the Arctic science community--at the death of Caleb Pungowiyi, earlier this week, at the age of 69.

While many social scientists have long recognized the importance of the Native American voice and their perspective to understanding the Arctic, only fairly recently, and belatedly, has that voice become an integral part of all Arctic sciences. This perspective informs, enhances and adds important, previously-overlooked dimensions to the work that scientists do above the Arctic Circle; a region that includes broad, ecologically and economically vital swaths of Alaska that are important to us in the "Lower 48."

Caleb served for many years as one of the most important of those Native American voices in scientific and political deliberations, serving as he did on NSF's Office of Polar Programs Advisory Committee, the Alaska Native Science Commission, and the Polar Research Board Committee on Bering Sea Ecosystems, to name only a few key positions he held.

Among his many contributions, he voiced the concerns of Northern people about climate change and encouraged scientists to turn their methods of analysis on the phenomenon.

Addressing a 2003 scientific meeting in Seattle, he said:

"We know this word anomaly that you scientists often use and we know how to live with it, when things go strange, when something is unusual. It happens all the time. But we always expect things go back to "normal" next year or a year after. This time things are not coming back to normal year after year after year. We are waiting and waiting, and it's still not 'normal'; that scares us."

Aware of his impending death, a number of his friends and colleagues recently compiled their personal recollections of Caleb. One contributor paid eloquent tribute to his contributions to the betterment of the Arctic through his advocacy and contributions to the scientific worldview of the Northern polar region.

He wrote that "Caleb was, quite simply, a world-class ambassador for Alaska and Arctic Indigenous peoples. He had such a remarkable repertoire of knowledge and understanding from his own culture. Whether an ecological facet of understanding animals and weather, or a cultural facet in articulating the values and beliefs of his home community, he was boundlessly generous in sharing with all of us. Caleb also represented his people with such consummate diplomacy. He had the dignity and grace to go toe to toe with the senior-most leaders of the Arctic countries, and generally to win accord with his disarming kindness."

For all of those reasons, it is with deepest respect that I pass along our condolences to Caleb's wife, Gladys, and to their family and to the wider community that knew him, respected him and benefitted greatly from his contributions to Arctic science. He will be sorely missed.