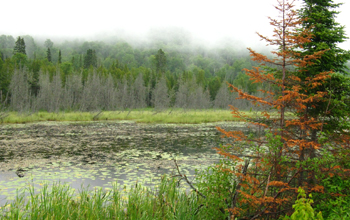 Thousands of lakes will be cross-compared in a macrosystems biology award from NSF.

To better detect, understand and predict the effects of climate and land-use change on organisms and ecosystems at regional to continental scales, the National Science Foundation (NSF) has awarded 14 grants in "macrosystems biology."

How will the biosphere respond to natural and human-induced changes across a range of time and space scales? What is the pace and pattern of the responses? What is the effect on ecosystem services, such as the availability of freshwater, across regions and continents?

Scientists funded to conduct macrosystems biology research are working to find the answers.

"The biosphere has changed more in the past 50 years than during any time in human history," says Henry Gholz, program director in NSF's Division of Environmental Biology.

"Many of the changes are driven by human activities such as climate and land-use change, and the introduction of invasive species," Gholz says. "Collectively, they affect living systems by altering the fundamental relationships between life and the non-living environment that sustains it."

Many of these changes, says Gholz, challenge our basic understanding of how the biosphere works.

Current knowledge of the biosphere is largely based on research within small land plots of less than one hectare and satellite-scale remote sensing.

But the insights needed to answer critically important questions about the biosphere's future can't be extrapolated from studies conducted at local or global scales, scientists have found.

"A major challenge in making predictions about the future of life on Earth is that organism and ecosystem responses may be driven by processes operating across geographic scales," says Elizabeth Blood, program director in NSF's Directorate for Biological Sciences Emerging Frontiers Division.

"As the scale of study increases to regions and continents, we need a better understanding of these complex dynamics and thresholds," Blood says.

Among other questions NSF's macrosystems biology awardees will ask are:

How are regional-scale processes of invasion and disease transmission shaped by continent-wide patterns? How can continent-wide data lead to better forecasts of disease outbreaks? How do invasive species and infectious diseases arrive at new locations, sometimes across great distances?

Projects include studies of the effects of temperature on biodiversity; climate and land-use change in mangroves and salt marshes; the ecological "homogenization" of urban America; the abundance of wildlife communities across large scales; patterns in North American monsoons and their effects on ecosystems; tracking phenology, or seasonal rhythms of plants and animals, on a continent-wide basis; the role of fire in Alaskan ecosystems; and climate and its interplay with wetland landscapes in the Great Plains.

The 14 projects criss-cross regions and continents and bring together scientists from biological sciences, geosciences and other fields in an effort to find out what makes our biosphere tick.

Summary: Computer models will be used to study the effects of climate change on the distribution of a widespread lizard. The models will link attributes of individual lizards to see how whole populations of lizards adapt to specific environmental conditions. For example, the models consider how temperature and rainfall limit lizard activity, such as feeding. Feeding is then related in the models to survival and reproduction. By monitoring the behavior and measuring activity of lizards across the entire United States, these scientists will be able to determine how climate in different regions affects lizards.

Summary: The increased diversity of living organisms from the poles to the tropics is one of the most pronounced features of life on Earth, but it lacks an explanation. One universal feature of this relationship, as seen across the land, oceans, lakes and rivers, is that hotter environments have more organisms of all kinds (animals, plants and microbes). In this study, a big-picture approach will be used to study the effect of temperature on biodiversity. It will generate mathematical models for how temperature, through its effect on chemical and biological processes, affects ecological interactions and patterns of biodiversity.

Summary: This project focuses on how environmental conditions vary locally in mountainous regions of the Western United States, and how rapid climate change may determine the survival and migration rates of trees. It involves an interdisciplinary team of climate scientists, ecologists, hydrologists and plant geographers. Field studies of local climate, tree establishment and tree growth will be combined with regional climate modeling and models that depict plant population and fire dynamics across the landscape.

Summary: How can small-scale ecological experiments be applied to understand the behavior of entire ecosystems? How should measures of fundamental properties of streams, and effects of animals on those properties be scaled up to predict characteristics of entire stream networks? The SCALER experiment will be carried out in tropical forest, temperate mountain forest, prairie, northern evergreen forest, and tundra. Small, medium and large streams in each area will be examined at scales of centimeters to tens of meters.

Project: Multi-Scale Drivers and Effects of Biotic Change in the Global Mangrove-Saltmarsh Ecotone

Summary: Mangrove forests dominate tropical coastal wetlands and are expanding their ranges and invading areas historically dominated by salt marshes. Mangroves and salt marshes provide critical ecosystem services that include filtering water, retaining nutrients, buffering shorelines from storms, supporting unique biodiversity, and serving as nurseries for important fisheries. Aerial photos and satellite remote sensing images will be used to document the rate and extent of mangrove spread over the last 50 years. Large-scale field experiments will test alternative mechanisms for these shifts. Models will be used to predict future changes in coastal wetlands.

Summary: Urban, suburban and ex-urban environments are important ecosystems; their extent is increasing across the United States. The conversion of wild to urban ecosystems is resulting in homogenization across cities, where neighborhoods in very different parts of the country have similar patterns of roads, residential lots, commercial areas, and wet areas. This project will test the idea that homogenization alters the storage of carbon and nitrogen, which has continental-scale implications. It will generate datasets ranging from household surveys to regional-scale remote sensing across six metropolitan areas that cover the major climatic regions of the United States: Phoenix; Miami; Baltimore; Boston; St. Paul, Minn. and Los Angeles.

Summary: Understanding what determines the abundance of wildlife communities, and estimating their abundance, remain major challenges. For most species, the factors that regulate their distribution and yearly fluctuations are unknown. This project uses a network of new motion-sensitive cameras for estimating animal abundance. This approach can produce data for terrestrial animals larger than a mouse, about 60 percent of the animals in the Eastern United States. The method encourages citizen-scientist participation, which opens the possibility of a more extensive sampling effort across the continent.

Summary: Because of the slow pace of most processes on land, the impact of changing climate and disturbance on forests plays out over hundreds of years. Scientists are studying how forests have changed at regional scales in the past to help evaluate future projections. Relevant paleoecological data have not been synthesized into a form that can be used in broad-scale modeling efforts. This project will establish a paleoecological observatory network (PALEON), with an interdisciplinary team of paleoecologists, environmental statisticians, and ecosystem modelers.

Project: Processes and Patterns in the North American Monsoon Macrosystem

Summary: The North American Monsoon System extends from central Mexico through the Southwestern United States. This project focuses on the processes in Earth's climate system that control the year-to-year variation of this system. New computer models will be developed to combine physical weather forecasting with biological processes linked with plants to determine how the highly variable monsoon rains control the spread of invasive grasses. The spread of these invasive grasses may, in turn, influence seasonal weather patterns and the monsoon system itself. This study will also explore how wildlfires in low-elevation dry grasslands and high-elevation forests compare. The participants in this project include ecologists and climate scientists from both the United States and Mexico.

Summary: The term phenology encompasses the seasonal rhythms of plants and animals, and the study of these rhythms. Plant phenology includes, for example, the timing of leaf emergence in the spring and color changes in the autumn, as well as longer-term changes in the effects of climate. A team of ecologists, geographers and computer scientists will develop a continental-scale observational network to study relationships between phenology and climate. Digital cameras posting live imagery to the Internet via webcams will be used to monitor spring "green-up" and autumn "brown-down" of vegetation in ecosystems across the United States.

Project: Fire in Northern Alaska: Effect of a Changing Disturbance Regime on a Regional Macrosystem

Summary: Increased temperatures in northern Alaska over the past 50 years have been accompanied by an increase in the frequency of wildfires, with more than half the fire activity on the North Slope in the past 60 years occurring since 2000. The effects of fire on carbon and energy balances in this region are not well known: the fires occur in remote regions, have been small in size, and are relatively infrequent. Fires release carbon into the atmosphere through combustion, reduce carbon sequestration through vegetation and soil changes and influence climate by darkening the surface and allowing more solar energy to be absorbed. The goal of this project is to better understand the short- and long-term effects of fire on the Arctic tundra.

Project: The Effects of Cross-scale Interactions on Freshwater Ecosystems Across Space and Time

Summary: Because climate and land-use strongly affect ecosystems and the services they provide to society, understanding these factors and their interactions is important for developing effective environmental management and policy. The goal of this project is to develop tools to measure and understand how climate and land use affect lake ecosystems. This project will identify and measure cross-scale interactions that control the amount of nutrients in a lake and its water quality. A team from three universities will collect data from 5,000 lakes in 11 U.S. states.

Summary: This pilot project addresses climate change effects on wetlands in the Great Plains of the United States and focuses on habitat connectivity, or the ability of wetland-dependent animal species to move between individual wetlands. Maintaining such connectivity is important to balancing agricultural production with wildlife conservation in this agriculture-dominant region. Projections of future climate and a computer simulation model of surface water dynamics will be used to predict locations of future wetlands, and the resulting impacts on wetland habitat connectivity. This project builds a research network that combines landscape ecology at South Dakota State University, climate modeling and ornithology at Texas Tech University, and hydrologic modeling at Ohio State University.

Summary: Accurate information about how carbon storage varies at large scales is needed for developing climate change policies. Although there is general agreement that North America is a large sink for carbon, how it varies in space and time is uncertain. Fast and accurate measurements, new computer models and techniques, and improvements in satellite information will be used as ways of addressing this uncertainty. A focus will be on understanding the effects of severe droughts, wildfires and timber-harvesting.