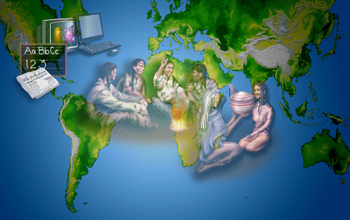 The National Endowment for the Humanities (NEH) and the National Science Foundation (NSF) today announced the award of 10 fellowships and 24 institutional grants totaling $3.9 million in the agencies' ongoing Documenting Endangered Languages (DEL) program.

This is the seventh round of their campaign to preserve records of languages threatened with extinction. Experts estimate that more than half of the approximately 7,000 currently used human languages are bound for oblivion in this century, and the window of opportunity for high-quality language field documentation, they say, narrows with each passing year.

These new DEL awards will support digital documentation work on almost 50 endangered languages, enhance the computational infrastructure of the field and provide training for the next generation of researchers.

For example, no more than a handful of speakers, all elderly, remain of Karuk and Yurok, two indigenous languages of northern California. The existing scholarly literature includes little information about their discourse and word order patterns.

A new DEL grant to Andrew Garrett will enable field workers from the University of California, Berkeley, to work with these speakers to analyze legacy field notes, narratives and other archival materials collected by several linguists during the 20th century and to collect new information about how they organize words and phrases into sentences.  The project will create a new collection of language materials for each language, fully annotated for use by researchers who are interested in the grammatical structure of sentences. In addition, Crystal Richardson, a member of the Karuk community, will complement the work on Karuk by recording oral histories and natural conversational speech in both audio and video form, supported by a DEL fellowship.

"We must do our best to document endangered languages before they fall silent," urged NSF Assistant Director for Social, Behavioral & Economic Sciences Myron Gutmann. "Endangered languages are an irreplaceable source of linguistic and cognitive information, and recent advances in information technology make it possible to integrate and analyze that body of knowledge more comprehensively."

Some DEL projects seek evidence about what is universal in language, and what those universals might tell us about human cognition. With support from a grant to SUNY at Buffalo, Jürgen Bohnemeyer is investigating how people represent the concept of space in 25 languages spoken on five continents. If people talk about objects in space differently, do they also think about them differently?

A separate DEL fellowship will allow Pedro Mateo-Pedro, a native speaker of Q'anjobal, to study children's acquisition of Chuj, a related Mayan language which is among the most endangered of all the Mayan languages. Since studies of children's language acquisition have focused primarily on Indo-European languages, this project will contribute significantly to the scope of scientific knowledge. Mateo-Pedro's project will involve training community members in language documentation and analysis.

"Language is integral to what makes us human," said NEH Chairman Jim Leach. "When a language disappears before it is documented, it limits our understanding of the way that people interact with their social and natural environments. By supporting the creation of dictionaries, grammars and digital archives, the DEL program preserves and makes accessible a rich set of cultural information that reflects the traditions and accumulated wisdom of peoples who have lived and thrived on our shared planet."

DEL awards to the University of Connecticut and the University of Alaska Fairbanks will enable Jonathan Bobaljik and David Koester to study Itelmen, a highly endangered language spoken natively by fewer than 20 persons on the Kamchatka peninsula in Russia. This collaborative project will compile audio and video for a dictionary of the Itelmen language.

Another DEL grant will allow linguist Scott Rushforth and the Mescalero Apache Tribe to develop a dictionary and grammar of Mescalero Apache, an Athabaskan language spoken in southern New Mexico which has fewer than 900 remaining speakers. The project will analyze the complex structure of verbs in the language and contribute to comparative work on the phonetics and phonology of the entire Athabaskan language family.

As part of the data collection, researchers will record and transcribe narratives, which also will capture the historical memory not only of the Mescalero, but also of the Chiricahua and Lipan Apache, throughout the period of the U.S. "settlement" of the west and post-relocation times.

In addition, a dissertation award to the University of Texas at Austin will allow John Sullivant, under the direction of Anthony Woodbury, to produce a reference grammar of Tataltepec de Valdés Chatino, a language of Oaxaca, Mexico, now spoken by fewer than two thousand people. The language has several uncommon grammatical features, including a rich system of lexical tone and unusually intricate rules for the interaction of tones.

A major goal of DEL is to enhance the training of both academic linguists and community members in documentary linguistics, say researchers. A number of recently awarded DEL projects support this goal.

A DEL grant to the University of Kansas will enable Arienne Dwyer to organize and direct a six-week institute in language documentation and research, featuring two weeks of intensive workshops on the practice of documentary linguistics, followed by a Practicum, a four-week apprenticeship in applying linguistic science and technology to on-site empirical documentation.

Another DEL grant will enable Mary Linn and Colleen Fitzgerald to present an Oklahoma Breath of Life Workshop and Documentation Project in 2012. Oklahoma has the highest Native language diversity in the United States, and all of the thirty-nine Native languages are endangered.

DEL already provided support for a national Breath of Life Workshop held at the National Museum of the American Indian in June of this year.

Another DEL grant will support a project directed by Durbin Feeling, a fluent speaker of Cherokee and a member of the Cherokee Nation, to study the prosody of Cherokee, a severely endangered Iroquoian language. This project will add information about lexical tone and vowel length for each entry in the Cherokee Electronic Dictionary, filling a gap in the available resources on Cherokee grammar.

Another DEL fellowship will allow Joshua Brown of Salish Kootenai College to record and transcribe natural discourse texts in Bitterroot Salish, which has only 30 remaining speakers, mostly elderly; his project will train younger community members to conduct documentary research on their ancestral language.

Fellowships ($50,400 each, unless otherwise noted. Awarded by NEH):

Doctoral Dissertation awards (awarded by NSF) [the first name is the faculty advisor, the second name is the graduate student conducting the dissertation research]