Hummingbirds All A-Flutter During Courtship

How the fluttering feathers of some hummingbird species generate courtship sounds 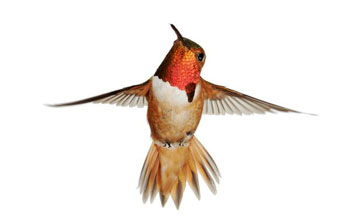 A male Allen's Hummingbird. Hummingbirds produce a diverse array of sounds with their tail feathers.

View a video of hummingbird feathers fluttering in a wind tunnel.

Though famous for their mid-air hovering during hunting, tiny hummingbirds have another trait that is literally telltale: males of some hummingbird species generate loud sounds with their tail feathers while courting females.

Now, for the first time, the cause of these sounds has been identified: a paper published in the Sep. 9, 2011 issue of Science by Christopher Clark of Yale University reveals that air flowing past the tail feathers of a male hummingbird makes his tail feathers flutter and thereby generate fluttering sounds.

Male hummingbirds only produce fluttering sounds during their elaborate courtship rituals. Typically, during such a display, a male hummingbird will climb into the air five to 40 meters, and then quickly dive-bomb down past a perched female; when the courting male bird reaches the lowest point of his dive, he rapidly spreads and then closes his tail feathers. This spreading exposes the tail features to air, which causes them to flutter and generate sound.

Clark's research, which he began as a graduate student at the University of California at Berkeley, shows that the males of each hummingbird species have their own signature sound--largely determined by whether and how the fluttering frequencies of its different tail feathers interact with one another and blend together. For example, the fluttering of one of a hummingbird's tail feathers may cause a neighboring feather to flutter, similar to the way that the vibrations of one tuning fork may cause another nearby tuning fork to similarly vibrate.

Other factors, such as the size, shape, mass and stiffness of the hummingbird's feathers, also help determine the tone of each species' particular sound. "The sounds that hummingbird feathers can make are more varied than I expected," said Clark.

When diving during their courtship dances, male hummingbirds exceed their usual flight speeds--with birds of at least some hummingbird species reaching their possible maximum speeds during dives. Also, the faster a male hummingbird dives, the louder his fluttering sounds become.

In addition to diving during courtship rituals, a male hummingbird may also brandish showy ornaments and produce sounds from other feathers besides his tail feathers. Females choose a mate from among available males.

Clark is unsure why male hummingbirds have evolved an ability to generate sounds with their tail feathers during courtship. But he offers two explanatory hypotheses.

According to the first hypothesis, it could be that female hummingbirds prefer to mate with the best flyers because of their relatively high fitness and that females use the volume of a suitor's tail feathers as a proxy for his fitness. If this were the case, perhaps males dive fast in order to increase the volume of their fluttering and thereby appeal to volume seeking female hummingbirds. The loudest males would thereby gain a selective advantage and be favored by evolution.

Clark notes that common sense says fluttering sounds generated by actual flight would provide a more accurate proxy of a bird's flying prowess than would vocal signals generated by mechanisms unrelated to flight.

According to Clark's second hypothesis, it could be that the sound of the hummingbirds' tail feathers developed incidentally to the birds' flying abilities without such sound serving any particular purpose--similar to the way that the sound of peoples' footsteps apparently developed incidentally to the ability to walk without such sounds serving any particular purpose. At the same time, it could be that female hummingbirds prefer the loudest males for reasons not related to their flying prowess. If this were the case, the loudest males would still have a selective advantage and would be favored by evolution.

"This work is an excellent example of the use of physical approaches to understand the function of biological structures, and it reveals aerodynamic--rather than vocalized--signaling during courtship," said William Zamer, who directs NSF's Ecological and Evolutionary Physiology program. "It is significant that the diversity of feather structures in these hummingbirds may result from sexual selection."

Clark notes that the aluminum wings of airplanes may also flutter as air flows over them, and in the absence of engineering controls, may even break because of such fluttering. Presumably, hummingbird feathers do not break when they flutter because they are less brittle than aluminum airplane wings, and so can bend more without being damaged.

The study was co-authored by Damian Elias, of the University of California at Berkeley. Elias contributed expertise and resources, including the Doppler vibrometer to measure the vibration of the hummingbird feathers.