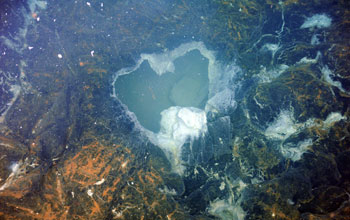 Axial Seamount in the deep ocean, and a "snowblower" vent with bacterial mats surrounding.

Last spring, a volcano erupted 425 kilometers (about 265 miles) off the Oregon coast and far below the surface, at Axial Seamount. No one was aware for months.

Now, the National Science Foundation's (NSF) Ocean Observatories Initiative (OOI) will survey the site and stream live video of the volcano. It's the first live video since the volcano spewed massive amounts of lava on April 6.

When NSF-funded Oregon State University geologist William Chadwick first discovered evidence of the April eruption on Axial in late July, he immediately communicated the information to a team of University of Washington (UW) scientists and engineers currently on an OOI expedition very near the recent eruption.

The team, aboard the research vessel Thomas G. Thompson, is conducting site surveys for the deployment of a sensor infrastructure that's part of OOI.

Surveying this site is just one example of the ways in which OOI will revolutionize the way oceanography is conducted. UW oceanographers John Delaney and Deborah Kelley are leading the expedition, known as VISIONS '11.

The submarine volcano is one of OOI's primary study sites. OOI, a multi-scale ocean observing system, will deploy sensors in the ocean and provide a networked system that will allow open access to data from the air-sea interface through the water column to the seafloor.

Scientists and engineers have been putting the finishing touches on the construction design phase of the cabled ocean observing system that forms a backbone of OOI.

This major component of the OOI program, with the formal name of the Regional Scale Nodes, is located off the Oregon and Washington coasts.

The Axial eruption has offered a rare opportunity to use this next-generation ocean-observing technology in innovative ways.

Investigating the seamount and its environs will allow the best decisions to be made on how to construct a long-term observatory at such active seafloor sites.

The crew on the Thompson is now using a host of modern seagoing research tools to examine the Axial site.

Their activities are focused in the short-term on using and producing new maps of the volcanic changes that have taken place since the eruption.

In another portion of the region off Oregon, other members of the OOI team on board the cable-laying ship TE Subcom Dependable are deploying and burying electro-optical cable as part of the current OOI installation activity.

"OOI is transforming our ability to study the global ocean," says Delaney. "We're fitting the Juan de Fuca Plate [off Oregon and Washington] and overlying ocean with myriad sensor arrays connected to a fiber optic-electrical network. This infrastructure will allow scientists to track changes taking place on a 24/7/365 basis for many decades."

Axial Seamount appears to be quiet at the moment, but viewers will see images of "frozen" eruptions with cooling lava flows blanketing the seafloor.

"We are excited to be working at Axial so soon after the latest eruption," said Kelley. "Using a remotely operated vehicle equipped with a high-definition underwater video camera, we are able to conduct surveys that will help determine the extent and amount of new lava flows, and assess the life forms that are already beginning to re-appear at the site."

It's a preview of the kinds of information OOI will enable researchers to collect.

OOI deployments will be on coastal, regional and global scales. OOI's planned operational timeframe is 25 years.

The data will be available to the public, educators and researchers, making oceanography possible for citizens and scholars who might never go to sea.

Sustained, time-series data provided by OOI will enable researchers to study complex, interlinked physical, chemical, biological and geological processes operating throughout the global ocean--processes such as those happening at Axial Seamount.

The OOI is managed under a cooperative agreement with NSF by the Consortium for Ocean Leadership, a Washington, D.C.-based nonprofit organization that represents 95 of the leading public and private ocean research and education institutions, aquaria and industry with the mission to advance research, education and sound ocean policy.