Statement by Karl A. Erb, Head of the National Science Foundation's Office of Polar Programs on the Death of Martin (Marty) Bergmann 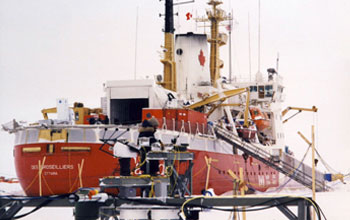 On behalf of the National Science Foundation (NSF) and the U.S. Arctic researchers it supports, I wish to express our collective sadness at the death of Martin ("Marty") Bergmann, director of Canada's Polar Continental Shelf Program and a leading light in Arctic science.

Marty, who died in an air crash last month, was memorialized Aug. 30 at the Winnipeg Convention Center. Such was his stature in Arctic research that the service was Webcast so that the many people whose lives he touched over his career could take part.

Arctic research, by its nature, transcends national boundaries and by doing so fosters a community of researchers who work frequently and cooperatively with colleagues from other Arctic nations. But even by the standards of such a close-knit community, Marty was widely known and well regarded. In one of the many public outpourings of grief since his tragic death, it was noted, "If it was good for Canada, good for the Arctic, and good for the people of the North, Marty Bergmann would make it happen."

Those here at NSF who worked with him would add only that if something was good for Arctic science, Marty could be counted upon to go the extra mile to make it happen. He was, for example, instrumental in arranging the use of the Canadian vessel Des Groseilliers in the Surface Heat Budget of the Arctic Ocean experiment in the late 1990's, thereby insuring this NSF-led project would become an international undertaking.

He also made it possible for U.S. researchers to sail aboard the Canadian Coast Guard vessel Louis S. St. Laurent. His contribution transformed what was initially solely an NSF-funded project into a very successful joint U.S.-Canadian project during the International Polar Year to study the freshwater systems of the Beaufort Gyre.

Both of those experiments will add immeasurably to our knowledge of the Arctic as a global system.

At the risk of duplicating what already has been said by his colleagues, many of us here in the U.S. scientific community will miss Marty's friendliness; his engagement in Polar science in a variety capacities; and, perhaps most of all, the grace with which he carried out his professional duties in an often demanding and difficult career.

It is a measure of Marty's lifetime of contributions that Canadian Prime Minister Stephen Harper praised him for his dedication to research.

"Marty Bergmann spent his life in pursuit of sharing the importance and relevance of the Arctic through science," Mr. Harper said. "He engaged Northern communities and worked to integrate traditional knowledge in the advancement of science. Mr. Bergmann's remarkable contributions to the North and to Canada will be remembered."

I would add only that while Canada is deservedly proud of its native son, like the research he facilitated, Marty's reputation, his legacy and the admiration they engender transcends national boundaries.

Our thoughts and best wishes go out to his wife, Sheila, and his four children at this very difficult time.