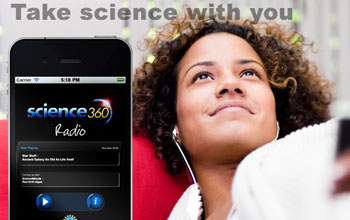 Science radio is available 24/7 as part of the Science360 Network from NSF.

Science360 Radio offers 24/7 programming, with more than 100 radio shows and podcasts produced in the United States, Canada, the United Kingdom and Australia. The programming is made available by the producers at no cost to NSF or listeners. It's available on the Web and via iPhone and Android devices.

"With Science360 Radio, the search is over. Now the world of science comes to your fingertips, and it's brought to you by all those who have committed to bringing the joys of discovery and the mysteries of the universe down to Earth," says Neil deGrasse Tyson, host of StarTalk Radio.

"Turn it up Loud!" says Planetary Society Executive Director Bill Nye, the Science Guy. "I am pleased indeed that Planetary Radio is now part of the lineup on Science360 Radio and The Knowledge Network. Let's share the passion, beauty and joy of science."

"Science360 Radio isn't just the first STEM Internet radio stream, it's also an incredible resource; the collection spans the scientific disciplines, giving the stream unparalleled informational breadth, and the variety of shows ensures that everyone will be able to find something to enjoy. I'm truly excited to be a part of it and am looking forward to hours of discovery and science entertainment now that it's available," says Kirsten Sanford, host of Dr. Kiki's Science Hour and co-host of This Week in Science.

"Now, with Science360 Radio, we can all stand on the shoulders of giants," adds Moira Gunn, host of NPR Talk's Tech Nation and BioTech Nation.

Science360 Radio also carries public radio documentaries, such as "Rocket Girls and the Astro-nettes," "Race and the Space Race" and the "Engineers of the New Millennium" series, as well as audio programming found nowhere else, such as NSF news conferences (webcasts) and the NSF series "Profiles of Scientists and Engineers," which highlights young professionals on the job.