From Tropics to Poles: Study Reveals Diversity of Life in Soils

New species discovered across the globe 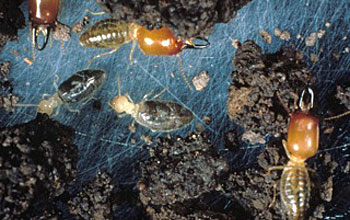 Down the rabbit hole: a new world of creatures awaits beneath the surface.

Microscopic animals that live in soils are as diverse in the tropical forests of Costa Rica as they are in the arid grasslands of Kenya, or the tundra and boreal forests of Alaska and Sweden.

That conclusion is found in research results published today in the journal Proceedings of the National Academy of Sciences.

Scientists have generally accepted that a wider range of species can be found above ground at the equator than at the Earth's poles.

But this study proves for the first time that the same rules don't apply to the nematodes, mites and springtails living underground.

"Important affirmation of this idea is provided in this global study of animals, in which the significance of belowground biodiversity is revealed."

This is the first comprehensive molecular analysis--at nearly a species resolution--of the global distribution of soil animals across a broad range of ecosystems from the tropics to the poles.

Soil samples were taken from 11 sites around the world, including tropical forest in Costa Rica, arid grassland in Kenya, warm temperate forest in New Zealand, shrub steppe of Argentina and tundra and boreal forest of Alaska and Sweden.

Through DNA testing, researchers found that each location had a diversity of soil animals, but that each ecosystem is unique with its own soil animals--illustrating an "amazing diversity of species" that had never been discovered before, said Garey.

"On average, 96 percent of our identified soil animals were found at only a single location, suggesting that most soil animals have restricted distributions, or in other words, they are endemic," said Wall.

"This challenges the long-held view that these smaller animals are widely distributed. However, unlike most above-ground organisms, there was no indication that latitude made a difference in soil animal diversity."

"Mites and roundworms dominate soil ecology and contribute to the breakdown and cycling of nutrients in the soil," Garey said. "These animals are essential to the proper functioning of the soil ecosystem in natural and farmlands."

The researchers also examined how the global distribution of soil animals relates to factors such as climate, soil nutrient levels and aboveground biodiversity.

Results showed that sites with greater aboveground biodiversity appeared to have lower diversity beneath in soils.

The main factors explaining this low soil animal diversity at sites with high aboveground diversity were high levels of soil inorganic nitrogen availability and lower pH compared with other sites.

Some sites with high animal biodiversity, like the Kenyan grassland site, are considered more at risk due to land use and population increase.