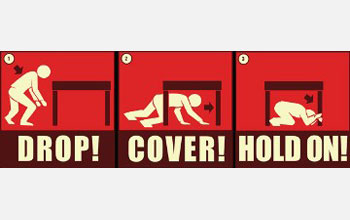 Drop, Cover, and Hold On! ShakeOut participants will learn how to deal with a quake.

The Shakeout will motivate people to be prepared to "Drop, Cover, and Hold On" to protect themselves during earthquakes at work, school and home.

To participate, register on the Great California ShakeOut website.

The ShakeOut began in southern California in 2008 as a way of involving the general public in a large-scale emergency management exercise.

It is based on a magnitude 7.8 earthquake along the San Andreas fault, and on the "ShakeOut Scenario" developed by a team of experts.

The Southern California Earthquake Center (SCEC) developed advanced simulations of this earthquake that were used to estimate potential losses and casualties, and to show the public how the shaking would be felt throughout the region.

SCEC is headquartered at the University of Southern California and funded primarily by the National Science Foundation (NSF) and United States Geological Survey (USGS).

"ShakeOut has been one of the great successes from long-term NSF and USGS support for SCEC's research and education activities," says Greg Anderson, program director in NSF's Division of Earth Sciences.

"ShakeOut started in southern California and has grown to become the largest public preparedness exercise in the United States. It's a great example of the broader impacts of NSF investments in basic science and education."

SCEC is a community of more than 600 scientists, students and staff members from some 60 institutions, in partnership with other science, engineering, education and government organizations worldwide.

In addition to scientific contributions to the ShakeOut Scenario, SCEC also hosts the ShakeOut website and created a registration system where participants could be counted in the overall total.

More than 5.4 million people participated in California in 2008, with schools for the first time coordinating earthquake drills on the same day.

Part of the appeal of the ShakeOut is its simplicity. At a minimum, participants practice "Drop, Cover, and Hold On," the recommended procedure for self-protection in an earthquake.

Many schools and other organizations also practice additional aspects of their preparedness plans.

While the 2008 California ShakeOut was initially conceived as an one-time event, participant demand convinced organizers to develop the ShakeOut into a statewide, annual event.

The 2011 Great California ShakeOut will be held on Oct. 20, 2011, at 10:20 a.m. PST, with more than 8 million people in businesses, government offices, neighborhoods, schools and as individuals currently registered.

"Registering allows us to know what people are planning for their drills and how many people are involved.  Once registered, they will receive updates and preparedness information."

Because of the success of the ShakeOut in California, SCEC has since worked with several other regions to create ShakeOut drills, with websites and registration systems all managed by SCEC.

In addition to the areas listed above that are holding drills on October 20th, eleven states in the Central United States participated in April 2011 and will again in February 2012.

Utah is holding its first ShakeOut on April 17, 2012, the first Tokyo Shakeout is planned for March 9, 2012, and New Zealand is planning a nationwide ShakeOut in September 2012.

SCEC has been able to develop a common set of messages and resources, which has grown as each new region develops materials and concepts.

"It's truly remarkable how collaborative the ShakeOut continues to be," said Benthien.

"The motto is that 'we are all in this together,' and this spirit has spread to other regions in creating new alliances and working across state and regional borders.

"ShakeOut is changing the way people and organizations are approaching community-wide earthquake preparedness."