The carbon footprint of humans will be reduced by four awards for plant and microbial research issued under a new joint U.S./Japanese program 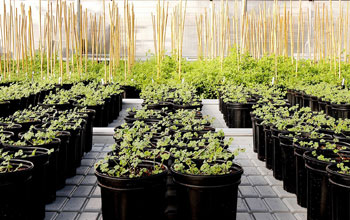 The Sumner/Saito team will characterize metabolites related to plant biomass and oil production.

Four joint United States and Japanese research teams have been awarded funding totaling about $12 million (about Yen 960 million) to develop new environmentally-friendly techniques to increase the production of renewable biofuel and reduce pesticide use.

These environmentally-friendly techniques will be based on studies of metabolites--chemical compounds that are produced in all living cells and are integral to a wide range of important and life-sustaining biological processes, including the ability of plants to fight disease-causing pests and the ability of photosynthetic algae to produce biofuel.

Currently, scientists can identify and characterize the properties of only a small fraction of the 10,000 to 15,000 metabolites that exist in any given plant. Nevertheless, an improved ability to identify and characterize these pivotal compounds could lead to the development of entirely new and potentially breakthrough approaches for increasing biofuel production and reducing pesticide use.

The four research projects announced today are not only important for their potential to help increase biofuel production and reduce pesticide use but also for their potential to produce much needed advances in the overall field of metabolomics--the study of all of an organism's metabolites. Metabolomics has exciting applications in varied fields, including environmental science, synthetic biology, medicine and predictive modeling of plant, algal and microbial systems.

The National Science Foundation (NSF) and the Japan Science and Technology Agency (JST) issued the four awards under the new "Metabolomics for a Low Carbon Society" program, the first to be fully jointly coordinated by the two agencies.

Each project will last three years, but could be extended for another two years based on the results of an evaluation that will be conducted during the third year of the project.

The four new Metabolomics for a Low Carbon Society projects will capitalize on the technical expertise and research infrastructures of both the United States and Japan, and to promote collaborative research between scientists in the two countries.

To this end, NSF and JST required all proposals for funding to include at least one U.S. researcher and one Japanese researcher, and NSF and JST jointly reviewed all submitted proposals.

"Projects from this program will benefit from complementary expertise, innovative approaches and cooperation--the kinds of advantages provided by international collaborations," said Subra Suresh, the director of NSF. "These projects offer particular promise for producing cutting-edge results that will take the field of metabolomics to new levels and yield important environmental benefits."

"The goal of this joint NSF-JST program is to advance novel biological knowledge in metabolomics in the areas of energy and the environment," said Michiharu Nakamura, the president of JST. "It is expected that the collaborative research among U.S. and Japanese scientists focused on fundamental research will strengthen a broader understanding of metabolomics, which is one of the most advanced areas of life science. It is also expected that the outcome of the joint research will significantly contribute to the development of a low carbon society."

Although each of the four funded trans-Pacific research projects addresses a unique research problem, these projects collectively address widespread challenges underlying metabolomics in all of its applications. These challenges include the pressing need to identify more metabolites and to develop more flexible and sophisticated metabolomics infrastructures, including comprehensive databases of species-dependent metabolites.  By addressing these widespread problems, results of the four funded projects will likely broadly advance the entire field.

These four new research projects are as follows:

Joint funding for Metabolomics for a Low Carbon Society is operated by NSF under its Division of Integrative Organismal Systems, Division of Molecular and Cellular Biosciences and Division of Biological Infrastructure, and is operated by JST under its Strategic International Collaborative Research Program (SICORP).

JST is Japan's core organization for implementing science and technology policy in line with the objectives of Japan's Science and Technology Basic Plan. The organization is dedicated to establishing Japan as a nation built on the creativity of science, technology and innovation. SICORP supports international exchange/joint research projects in various fields with counterpart agencies of other countries via international agreements