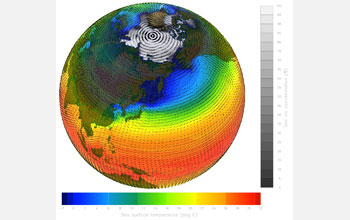 What will Earth's climate be like in a decade--or sooner? And what will it be like where you live and around the globe?

NSF and other federal agencies recently awarded more than $38 million to study the consequences of climate variability and change. The awards, made through the interagency Decadal and Regional Climate Prediction Using Earth System Models (EaSM) program, include more than $20 million allocated by NSF's Directorate for Geosciences.

Among the subjects addressed by the awards are:

According to scientists, the EaSM program addresses one of the most pressing problems of the millennium: climate change and how it is likely to affect the world--and how people can plan for its consequences.

"The EaSM projects will expand the limits of our quantitative understanding of the Earth's climate system," says Tim Killeen, NSF assistant director for Geosciences. "They will lead to better ways of predicting climate change. The knowledge being developed will lead to improved, science-based decision-making about our common future."

The consequences of climate variability and change are becoming more immediate and profound than previously anticipated, scientists believe.

Prolonged droughts on several continents, increasing stresses on natural and managed ecosystems, loss of agricultural and forest productivity, degraded ocean and permafrost habitats, global sea-level rise and the rapid retreat of ice sheets and glaciers and changes in ocean currents have shown that climate variability and change may have significant effects on decade and shorter time scales.

Those effects, researchers have found, for humans and other animals, plants and physical systems such as the oceans, may be far-reaching.

Among the goals of the EaSM program is achieving reliable global and regional predictions of decadal climate variability and change through an understanding of the coupled physical, chemical, biological and human processes that drive the climate system.

Awardees are working to quantify the effects of climate variability and change on ecological, agricultural and other human systems, and to identify and quantify "feedback loops" through which humans affect the environment.

Scientists are maximizing observational and model data for impact and vulnerability/resilience assessments, and translating models results, and their uncertainties, into the scientific basis for well-informed human adaptation to and management decisions for climate change.

Decisions that need to happen, says Killeen, in the coming years, not decades or centuries.