One if by Land, Two if by Sea? Climate Change "Escape Routes" 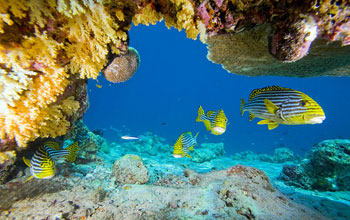 Escaping climate change: one if by land, two if by sea? No, according to recent results.

One if by land, two if by sea?

Results of a study published this week in the journal Science show how fast animal and plant populations would need to move to keep up with recent climate change effects in the ocean and on land.

The answer: at similar rates.

The study was supported by the National Science Foundation (NSF), and performed in part through the National Center for Ecological Analysis and Synthesis at the University of California at Santa Barbara.

"That average rates of environmental change in the oceans and on land are similar is not such a surprise," says Henry Gholz, program director in NSF's Division of Environmental Biology.

"But averages deceive," Gholz says, "and this study shows that rates of change are at times greater in the oceans than on land--and as complex as the currents themselves."

Greenhouse gases have warmed the land by approximately one degree Celsius since 1960. That rate is roughly three times faster than the rate of ocean warming. These temperatures have forced wild populations to adapt--or to be on the move, continually relocating.

Although the oceans have experienced less warming overall, plants and animals need to move as quickly in the sea as they do on land to keep up with their preferred environments.

"Not a lot of marine critters have been able to keep up with that," says paper co-author John Bruno, a marine ecologist at the University of North Carolina at Chapel Hill. "Being stuck in a warming environment can cause reductions in the growth, reproduction and survival of ecologically and economically important ocean life such as fish, corals and sea birds."

The analysis is an example of the value of synthesis research centers, Garrison says, in addressing society's environmental challenges.

"With climate change we often assume that populations simply need to move poleward to escape warming, but our study shows that in the ocean, the escape routes are more complex," says ecologist Lauren Buckley of the University of North Carolina at Chapel Hill, also a co-author of the paper.

"For example, due to increased upwelling, marine life off the California coast would have to move south [rather than north] to remain in its preferred environment."

"Some of the areas where organisms would need to relocate the fastest are important biodiversity hot spots, such as the coral triangle region in southeastern Asia," says lead author Mike Burrows of the Scottish Association of Marine Science.

Whether by land or by sea, according to these results, all will need to be on the fly.