Diversity of Life on Earth: NSF Awards Grants for Study of Dimensions of Biodiversity 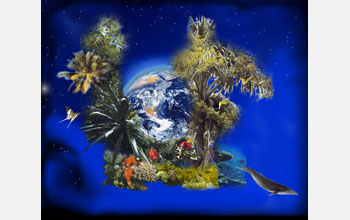 Earth is losing species more rapidly than scientists can understand the roles these species play and how they function.

With this loss comes, biologists believe, lost opportunities to understand the history of life, to better predict the future of the living world and to make beneficial discoveries in the areas of food, fiber, fuel, pharmaceuticals and bio-inspired innovation.

To characterize the lesser-known aspects of the diversity of life on Earth, the National Science Foundation (NSF) is now in the second year of its decade-long Dimensions of Biodiversity campaign.

The effort, funded by NSF's Directorate for Biological Sciences along with its Directorate for Geosciences and Office of Polar Programs, aims to transform, by 2020, how scientists describe and understand the scope and role of life on Earth.

"By establishing networks of interdisciplinary, globally-engaged scientists, Dimensions of Biodiversity will have a lasting effect on biodiversity science," says John Wingfield, NSF Assistant Director for Biological Sciences. "It has the potential to transform the way we conduct biological research in this arena."

There are more than 450,000 beetle species on the planet, for example, but only 270 or so species of cat- or dog-like carnivores.

The domestic dog, on the other hand, is just one sub-species of carnivore, but includes hundreds of artificially selected breeds and varieties spanning a range of sizes, shapes and temperaments.

Species (beetles) and genetic (dog breed) variation represent just two types of biodiversity. There's also diversity in the evolutionary history of groups of species; the ecological links among them; their functions; and the benefits they provide humans, among others.

All species rely on a vast network of mostly invisible and largely unknown life forms, such as bacteria and fungi.

As a result, most aspects of Earth's biodiversity still remain unknown. Characterizing these dimensions of biodiversity and how they interact is increasingly important given the pace of global change.

Addressing the knowledge gaps in understanding biodiversity, scientists say, will require new thinking and a coordinated effort among several sub-disciplines of biology.

An important distinction of the Dimensions of Biodiversity initiative is the simultaneous investigation of the links and feedbacks between genetic, phylogenetic, taxonomic and functional dimensions of biodiversity, says Joann Roskoski, NSF deputy assistant director for Biological Sciences.

Roskoski says that the innovative and interdisciplinary teams of the Dimensions of Biodiversity campaign "may accomplish in 10 years what, with a piecemeal approach, would have taken 50 years--a half-century we can no longer afford to wait."

The Dimensions of Biodiversity campaign is developing the workforce and partnerships necessary for the unique human- and cyber-infrastructure challenges of an interdisciplinary network of researchers.

Dimensions currently has partnerships with NASA and funding agencies in China and Brazil.

International partnerships are supporting the exchange of students and scientists, joint research projects, and the digitization of biological collections.

Dimensions is also using a distributed graduate seminar to assess what is currently known about the taxonomic, phylogenetic, genetic and functional dimensions of biodiversity.

This baseline assessment will be available to the broader scientific community to help evaluate and direct the Dimensions of Biodiversity campaign.

Title: Pattern and process in marine bacterial, archaeal, and protistan biodiversity, and effects of human impacts
PI (Principal investigator): Jed Fuhrman, University of Southern California
Summary: Very little about marine microbial systems is understood, despite the fact that these diverse groups dominate cycling of elements in the oceans. Fuhrman and colleagues will compare heavily affected harbor regions with relatively pristine ocean habitat in the Los Angeles basin to understand patterns and relationships in marine microbial communities.

Title: Coexistence, herbivore host choice, and plant-herbivore evolution in the recently radiated and speciose Neotropical tree genus, Inga
PI: Thomas Kursar, University of Utah
Summary: More than half the known species in tropical forests are plants and the insects that feed on them. This project will study interactions between members of the tree genus Inga (with more than 300 species) and its insect herbivores at five sites in Central and South America. The work will shed light on the co-evolution of plants and herbivores, and its influence on the ecology of some of the most diverse forest communities on Earth.

Title: Integrating dimensions of Solanum biodiversity: Leveraging comparative and experimental transcriptomics to understand functional responses to environmental change
PI: Leonie Moyle, Indiana University
Summary: This research will highlight the role of drought and herbivore defense in driving the remarkable diversity of wild tomato species. With the economic importance of tomatoes and their relatives (such as peppers and potatoes), this study will help prepare society for the future challenges facing global food security.

Title: Diversity and symbiosis: Examining the taxonomic, genetic, and functional diversity of amphibian skin microbiota
PI: Lisa Belden, Virginia Polytechnic Institute & State University
Summary: All animals host internal and external symbiotic microbes; most cause no harm and many are beneficial. This study seeks to understand the regulation of microbial communities on the skin of amphibian species, and how they may limit infection by a chytrid fungus that has decimated many amphibian populations around the globe.

Title: Integrating genetic, taxonomic, and functional diversity of tetrapods across the Americas and through extinction risk
PI: Thomas Brooks, NatureServe
Summary: Most large-scale efforts to assess biodiversity have focused on genetic, taxonomic and functional dimensions individually; it is unknown how these dimensions relate to each other. Brooks and colleagues are using a database of the 13,000 land vertebrates in the Americas to determine how changes in one dimension of biodiversity influence changes in others. Understanding how species composition influences the diversity of certain traits, for example, will improve the efficiency and effectiveness of conservation actions.

Title: Lake Baikal responses to global change: The role of genetic, functional and taxonomic diversity in the plankton
PI: Elena Litchman, Michigan State University
Summary: Microscopic plant- and animal-like plankton are the first links in aquatic food chains. This project will study the planktonic food web of the world's largest, oldest, and most biologically diverse lake--Lake Baikal in Siberia--to predict how native vs. non-native plankton in this ecosystem will respond to accelerating environmental change.

Title: Functional diversity of microbial trophic guilds defined using stable isotope ratios of proteins
PI: Ann Pearson, Harvard University
Summary: Studying the ecological interactions among microbes is difficult given their immense diversity and the scale of observation. This project will use isotopic ratios of carbon, nitrogen, hydrogen and sulfur produced during microbial metabolism to link microbes to their roles in biogeochemical and ecosystem processes. This novel approach will contribute to an understanding of what maintains diversity in microbes and, by extension, the roles microbes play in ecosystems.

Title: The climate cascade: Functional and evolutionary consequences of climatic change on species, trait, and genetic diversity in a temperate ant community
PI: Nathan Sanders, University of Tennessee, Knoxville
Summary: Sanders and colleagues will help us understand what mechanisms allow some species to adapt to shifts in climate, rather than migrating or going extinct. This project will reconstruct past adaptations to climate change in a foraging ant common in forests throughout the Eastern United States and sample ant nests introduced to outdoor experimental warming chambers to determine the ant's capacity to adapt to heat stress.

Title: An integrated study of energy metabolism, carbon fixation, and colonization mechanisms in chemosynthetic microbial communities at deep-sea vents
PI: Stefan Sievert, Woods Hole Oceanographic Institution
Summary: The 1977 discovery of deep-sea hydrothermal vent ecosystems that obtain energy not through photosynthesis, but via inorganic chemical reactions greatly expanded the perception of life on Earth. However, there has been limited progress since then in understanding their underlying microbiology and biogeochemistry. This project will establish an international research program to better understand these deep-sea ecosystems and to place them in a global context.

Title: Functional diversity of marine eukaryotic phytoplankton and their contributions to carbon and nitrogen cycling
PI: Bess Ward, Princeton University
Summary: Marine phytoplankton form the base of food webs in the ocean's surface layers, and thus represent the first incorporation of biologically important chemicals. This project will study two north Atlantic sites in two seasons to link the genetic diversity and species composition of phytoplankton communities to the carbon and nitrogen biogeochemistry of the surface ocean.

Title: IRCN (International Research Coordination Network): A Research Coordination Network for Biodiversity of Ciliates
PI: John Clamp, North Carolina Central University
Summary: Ciliates are abundant, widespread protists found in all aquatic systems on Earth. However, it is estimated that science has described only 25 percent of these ubiquitous microorganisms, mainly in western European and eastern North American waters. This cooperative project is partially supported by the Natural Science Foundation of China, and will establish an International Research Coordination Network for Biodiversity of Ciliates (RCN-BC; including researchers from the United States, China, the United Kingdom and Brazil) to broaden exploration of these important protists.