Near-Earth Flyby of Large Asteroid to Occur on November 8: Chat Live This Thursday Online With Astronomers 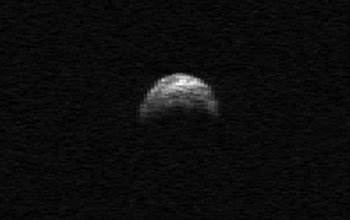 You are invited to participate in a live online chat this Thursday from 3 p.m. to 4 p.m. EDT with two eminent astronomers from the National Science Foundation (NSF) and NASA, who will discuss a large asteroid that will approach close to Earth on Nov. 8, 2011 and the science of such near-Earth asteroids.

This rare flyby of the asteroid--which is known as 2005 YU55--will likely draw significant public interest because of the asteroid's large size of about 396 meters (1,300 feet) in diameter, the nature of its close encounter with Earth and the public's fascination with near-Earth objects.

The chat is sponsored by ScienceNOW, the daily news site of the journal Science. To participate, go to ScienceNow's website on November 3 at 3 p.m. EDT and submit questions to:

The November 3 chat about asteroid 2005 YU55 and other near-Earth objects provides an ideal opportunity to ask experts about these and other topics:

The live online chat on 2055 YU55 is part of the journal Science's weekly series of chats on the hottest topics in science held every Thursday at 3 p.m. EDT.