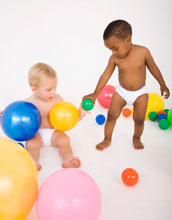 Skills that physicists and engineers rely on can be taught to young children.

Preschool children who hear parents use words describing the size and shape of objects and who then use those words in their day to day interactions do much better on tests of their spatial skills, a University of Chicago study shows.

The study is the first to demonstrate that learning to use a wide range of words related to shape and size may improve children's later spatial skills, which are important in mathematics, science and technology.

These are skills that physicists and engineers rely on to take an abstract idea, conceptualize it and turn it into a real-world process, action or device, for example.

Researchers found that 1- to 4-year-olds who heard and then spoke 45 additional spatial words that described sizes and shapes saw, on average, a 23 percent increase in their scores on a non-verbal assessment of spatial thinking.

"Our results suggest that children's talk about space early in development is a significant predictor of their later spatial thinking," said University of Chicago psychologist Susan Levine, an author of a paper published on the research in the current issue of Developmental Science.

"In view of findings that show spatial thinking is an important predictor of STEM achievement and careers, it is important to explore the kinds of early inputs that are related to the development of thinking in this domain," Levine and colleagues write in the article, "Children's Spatial Thinking: Does Talk about the Spatial World Matter?"

STEM--Science, Technology, Engineering and Mathematics--education is seen as vitally important for the next generation of science and technology innovators in the 21st century. In fact, a 2007 report issued by the National Science Board argues that to succeed in a new information-based and highly technological society, all students need to develop their capabilities in STEM to levels much beyond what was considered acceptable in the past, and enhancing spatial thinking is an important component of achieving this goal.

"This study is important because it will help parents and caregivers to better recognize and to seek opportunities that enhance children's spatial learning," said Soo-Siang Lim, director for the Science of Learning Centers Program at the National Science Foundation, which partially funded the study. "Study results could also help spatial learning play a more purposeful role in children's learning trajectories."

For the study, the research team videotaped children between ages 14 and 46 months and their primary caregivers, who were mainly the children's mothers. Researchers videotaped the caregivers as they interacted with their children in 90 minute sessions at four-month intervals. Caregivers and children were asked to engage in their normal, everyday activities.

The study group included 52 children and 52 parents from an economically and ethnically diverse set of homes in the Chicago area.

The researchers recorded words that were related to spatial concepts used by both children and their parents. They noted the use of names for two and three dimensional objects, such as circle or triangle.  They also noted words that described size, such as tall and wide and words descriptive of spatial features such as bent, edge and corner.

The researchers found a great variation in the number of spatial words used by parents. On average parents used 167 words related to spatial concepts, but the range was very wide with parents using from 5 to 525 spatial words.

Among children, there was a similar variability, with children producing an average of 74 spatial related words and using a range of 4 to 191 words during the study period--composed of nine, 90 minute visits. The children who used more spatial terms were more likely to have caregivers who used those terms more often.

Moreover, when the children were four and a half years old, the team tested them for their spatial skills, to see if they could mentally rotate objects, copy block designs or match analogous spatial relations.

The researchers found that the children who were exposed to more spatial terms as part of their everyday activities and learned to produce these words themselves did much better on spatial tests than children who did not hear and produce as many of these terms. Importantly, this was true even controlling for children's overall productive vocabulary.

The impact was biggest for two of the tasks--the spatial analogies task and the mental rotation task. On the spatial analogy task, children, ages four and a half, were shown an array of four pictures and asked to select which picture "goes best" with a target picture--the one that depicted the same spatial relation.

The increased use of spatial language may have prompted the children's attention to the depicted spatial relations and improved their ability to solve spatial problems, the researchers said. The language knowledge may also have reduced the mental load involved in transforming shapes on the mental rotation task, they added.

In addition to NSF's Science of Learning Centers Program award to the Spatial Intelligence and Learning Center, the research was supported by the National Institute of Child Health and Human Development.