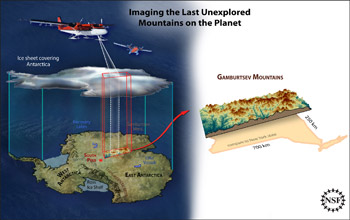 The topography of the Gamburtsev Mountains beneath the Antarctic ice.

National Science Foundation- (NSF) funded researchers may have at last answered a 50 year-old conundrum. They may now know how Antarctica's Gamburtsev Subglacial Mountains were formed, which has been a question for scientists since their discovery in 1958.

Researchers involved in a highly complex research deployment to the Gamburtsev Subglacial Mountains, a centerpiece of the 2007-2009 International Polar Year (IPY), conclude the mountains formed as a result of multiple tectonic events, rather than a single event.

By analyzing the new geophysical data that sharpened the view of the mountains, the researchers describe processes-which took place over the past billion years-that created and preserved a root beneath the mountains and the East Antarctic rift system--a 3,000-kilometer-long long fracture in the earth's surface that extends from East Antarctica across the ocean to India.

One billion years ago, before animals and plants evolved on Earth, several continents (or micro-continents) collided, pushing up a mountain range and forming a thick crustal root. While the mountain range eroded away, the root was preserved. Over time, events rejuvenated the roots and rifting allowed more uplift to reform the mountains and the ice sheet preserved them.

Around 250-100 million years ago--when dinosaurs walked the Earth--rifting paved the way for the supercontinent Gondwana to break apart, which included Antarctica, causing the old crustal root to warm. This rejuvenated crustal root, together with the East Antarctic Rift forced the land upwards again reforming the mountains. Rivers and glaciers carved deep valleys and this helped uplift the peaks to create the spectacular landscape of the Gamburtsevs, which resemble the European Alps. The East Antarctic Ice Sheet, which formed 34 million years ago and covers 10 million square kilometers of our planet, an area the size of Canada, protected the mountains from erosion.

NSF led the multi-national effort and was the lead U.S. agency for the IPY, a concentrated deployment by scientists of 60 nations to the Polar Regions. NSF's Office of Polar Programs also manages the U.S. Antarctic Program, though which it coordinates all U.S. research and logistical support for science on the southernmost continent and its surrounding oceans.

During IPY,  a seven nation team made up the Antarctica's Gamburstev Province (AGAP) project, consisting of scientists from Australia, Canada, China, Germany, Japan, the United Kingdom and the United States. Team members explored the Gamburtsev Subglacial Mountains, which are buried beneath up to three kilometers of ice, by using two twin-engine aircraft equipped with ice penetrating radars, gravity meters and magnetometers.

"Resolving the contradiction of the Gamburtsev high elevation and youthful Alpine topography but location on the East Antarctic craton by piecing together the billion year history of the region was exciting and challenging," said Carol Finn, of the U.S. Geological Survey, a co-author on the paper. "We are accustomed to thinking that mountain building relates to a single tectonic event, rather than sequences of events. The lesson we learned about multiple events forming the Gamburtsevs may inform studies of the history of other mountain belts. The youthful look of any mountain range may mask a hidden past."

Scientists noted that the results have a special significance in a year that marks the centennial of the achievement of the South Pole by Norwegian Roald Amundsen. Historians acknowledged that his rival in the quest for the Pole, Briton Robert F. Scott, and his party helped lay the foundations for modern Antarctic science in their trek by making systematic scientific observations of various phenomena. Although Scott and his men perished en route back from the Pole, they did not abandon fossils and rocks gathered on their journey as a legacy to scientific exploration.

"It is very fitting that the initial results of the AGAP project are coming out 100 years after the great explorers raced to the South Pole," said Alexandra Isern, Antarctic Earth sciences program director in NSF's Office of Polar Programs, "The scientific explorers of the AGAP project worked in harsh conditions to collect the data and detailed images of this major mountain range under the East Antarctic Ice Sheet. The results of their work will guide research in this region for many years to come."

Robin Bell, of Columbia University's Lamont-Doherty Earth Observatory, U.S. AGAP co-leader, noted that another scientific challenge lying ahead in piecing together the Gamburtsev's story will be to actually sample the materials that form the mountains.

"The next steps will be to assemble a team to drill through the ice into the mountains to obtain the first rock samples from the Gamburtsevs, she said. "We have samples of the moon, but none of the Gamburtsevs. With these rock samples we will be able to constrain when this ancient piece of crust was rejuvenated and grew to a magnificent mountain range."